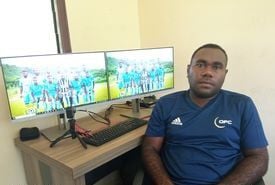 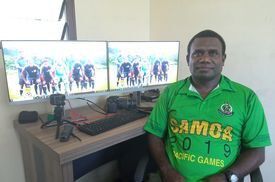 VFF had deployed some of its coaches to provide assistance in few Member Associations (MAs) to help out in preparations towards the NL competition. It believes that such avenue will prepare Vanuatu towards International competitions as well.

VFF Coach, Joel Rarua who was deployed to assist the Sanma FA, said that such pathway will enable good competition displays by all MAs during the National League competitions as this competition compromise of all best players from all MAs.

Mr Rarua said that the deployment program had seen great improvements from his team as well. He said that such programs have helped players to think and to go professional as well especially when most of the players are residing within the rural communities and focusing on agriculture as their main source of income.

He said that providing such assistance to the Sanma FA will enable them to continue provide such training programs for players towards the next national league edition. Coach Rarua further said that it allowed player promotion and exposure to upgrade their experience skills as well.

Mr Rarua further appealed to all MAs throughout the country to create league competitions and programs which will enable all MAs to remain active, furthermore upgrade the soccer development of Vanuatu.

He believes with the trainings provided, Sanma FA is on track to strengthen the football industry.

VFF and Penama FA Coach, Yalou Robert said that such pathways are beneficial for players and coaches. He added that both get to upgrade their capacity of improving.

Coach Robert said that one feedback observed in the recent competition is the score sheets of each match. He added that last year there was a difference but this year, all were close to each other.

He confirmed that the deployment programs are receiving positive feedbacks and will continue in all competitions as well.

Mr Robert further said that it also provides coaches the opportunity of scouting players as well. He stated that although there were a few challenges however all soccer players have the capacity to upgrade their skills with the assistance of proper people providing proper trainings.

He added that it also allowed him to scout players effectively to ensure a good selection not only locally but to participate internationally as well. Coach Robert stated that such avenue should be provided always in the future.