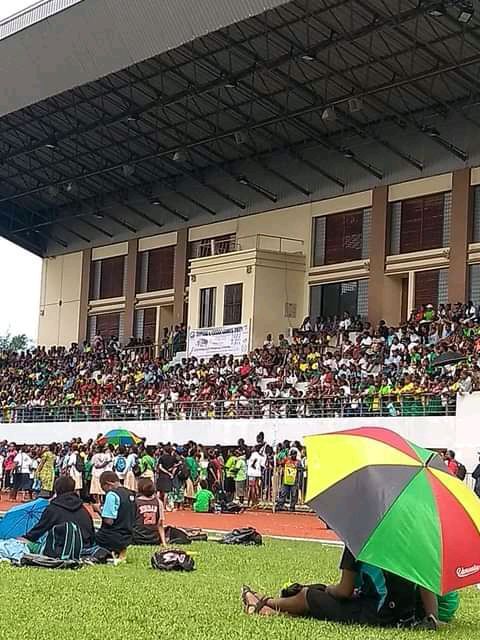 Every years, all schools in Port Vila are joining together through sport activities and participate on several sport disciplines as football, volleyball, individuals games like athletic games. The each schools selects students in a discipline and they play against the other participated school students.

Before the opening, a total of over 2000 students representing schools in Port-Vila performed a parade march from outside the sports complex to the stadium.

After the parade, the students and teachers witnessed the official’s speeches from the government’s delegation and the responsible of the youth and sport Department.

Miss Valia Mackin, the principal of Ulei Secondary school was invited to open the speeches. “Thank you so much to hardworking parents and principals to work together gathering all the students here this morning”, she said.

The theme this year: “Empowering youths through sportsmanship” is very important because we can have differences through areas and other fields but when it comes to sports, it is a team spirit, she continued.

Mr Henry Tavoa, the Director to the department of Youth and Sports was also invited to share a speech. “Students, do you know why we choose the theme sport, empowering youths through sport? Sport is a teacher, it teaches you disciplines, it teaches you unity in level of schools and in national level,” he said.

The acting Director General of the Ministry of Justice, Johnny Marango. “Our ministry is working hard to protect children’s right, and protect them from child abuse and others violence against children, he said.” He then officially launched the games and also the Children’s Day celebration.

After the speeches, the games kicked off after lunch, where football matches and volleyball match took place. The programs will end on the 23th of July 2021, before Children’s Day.