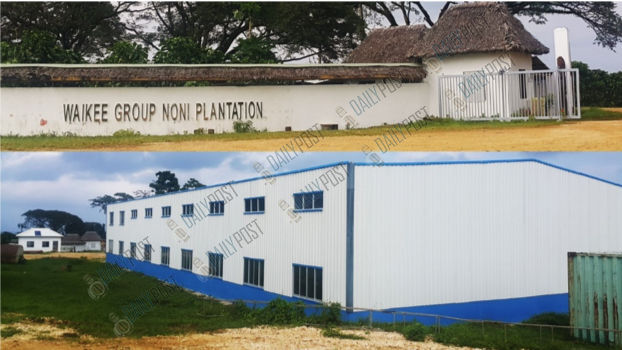 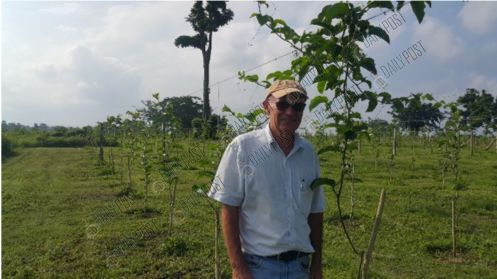 This week’s visit by the Chairman and Chief Executive Officer of Vanuatu Foreign Investment Promotion Agency (VFIPA) in the northern town has been a major eye-opener. Santo is poised for very interesting times in the coming years. The old sleepy Luganville as we’ve known it for many years has obviously changed tremendously over the past 5 years, and the steady growth of Foreign Direct Investment (FDI) on Santo is telling. In terms of the opportunities and the landmass, Espiritu Santo is the home to be for major FDI in Vanuatu in the coming months and years. A few examples will do.

This giant warehouse sits alongside the East coast Santo highway, almost in the middle of nowhere. It is only one of several similar warehouses and a huge noni farm owned by the Waikee Group Noni Plantation established at Velit Bay on the Eastern coast of Espiritu Santo.

The project specializes in the processing of noni into noni juice, capsules and other bi-products, purely for the export market. Close to 200,000 noni plants grow on Waikee’s vast plantation spanning several hectares.

Forney Enterprises (FE) which is owned and directed by longtime investor Mr. John Fordham is also one similar huge investment in the kava industry which is making waves in the northern region and across the globe. FE is very likely the biggest entity of its kind in the industry and in the world – given of course that Vanuatu is the home of kava on the planet. FE is a market leader and its state-of-the-art technology in the kava processing industry is second to none across the Pacific region.

While the rest of the country is struggling under COVID-19, FE is in full operations. Its brand new factory will be officially opened soon in a massive growth plan that is definitely going to take the region and Vanuatu’s kava industry by a storm.

Tropical Plantations (TPL) is another major investment that a lot of people simply don’t know about.

Tucked away up on the Beleru plateau, TPL has invested in a major farm of 30,000 passion fruit plants, which according to TPL’s owner and Director (Robert) comprises 10% of the total Australian production.

TPL is the largest passion fruit grower in the Pacific region, or possibly the only one. Robert wields over 30 years’ experience in the Australian/American food processing industry and has connections with major importers and other serious investors in Australia and the United States.

Like FE, TPL is in full operation today with over 20 staff working ‘6 to 6’ as they target their initial exports of frozen bananas, pineapples and coconut flesh in December this year, while awaiting the first harvest of its passion fruit around March 2021.

Other Investors on the Radar

A couple of colleagues who work very closely with VFIPA have revealed interesting discussions in progress with investors based in Australia, Dubai, Israel and Italy. Discussions are intensifying while investors are awaiting reopening of borders. VFIPA is about to launch out on a major historic exercise of preparing its first ever Investment Promotion and Marketing Strategy (IPMS) to target potential investors.

The big question – When are borders re-opening?

To echo the call by Mr. James Hudson – former CEO of Bred Bank at last week’s national business forum, Vanuatu’s borders have to be reopened sooner than later. I agree fully with him, not just for the sake of the economy but more so for the sake of our people – jobs and income.

As we’ve heard last week from authorities within the Ministry of Finance, passport sales are an “unsustainable” undertaking. Vanuatu’s borders cannot be closed indefinitely. COVID-19 is here to stay, like AIDs.

We need to find ways to manage border re-opening and COVID-19 simultaneously. Seasonal workers returning home is one thing, but that does not provide the solution to the thousands of unemployed citizens in our country today. As earlier argued, we’ve been playing defense now for 8 long months. Tourism revenue has trickled down to zero, exports are at a minimal. How do we justify bleeding the economy to a crippled status yet expecting social and other services to function in the long run?

Both PNG and Fiji which have had COVID-19 cases and even a few deaths have now opened their borders to travelers from certain countries.

Why? Because despite being stronger economically than Vanuatu, they realize the need for jobs, new money flowing into the economy, and poverty alleviation. In Vanuatu we’re still playing defense.

We in Government who are still on full payroll are ok, even when we keep borders closed. Why? Because we get paid our full salaries every fortnight. This isn’t the case for thousands of helpless workers who have had to be laid off work since March 2020.

We’ve closed our borders but we’ve not provided income solutions to parents who need to feed their children, pay for their home rentals, electricity, water and other necessities. We need to take our management of Covid-19 to the next level.

Maybe the Government should cut the salaries of all public servants across Government and in State-owned Enterprises and statutory bodies so at least we feel the pain that the helpless mothers and fathers and children in the country have been facing since March. We need to stop theorizing and start to live in the real world – the kind of world that the unemployed families around us face today.

The big question remains – when are borders re-opening, at least to certain parts of the world that are Covid-free at the moment?

Howard Aru is current CEO of the Vanuatu Foreign Investment Promotion Agency (VFIPA) and former Director General of the Ministry of Agriculture, Livestock, Forestry, Fisheries and Biosecurity, and the Ministry of Health.