4th NAF Closing Ceremony, handing over of ‘Stik Faea’ from Malampa to Tafea 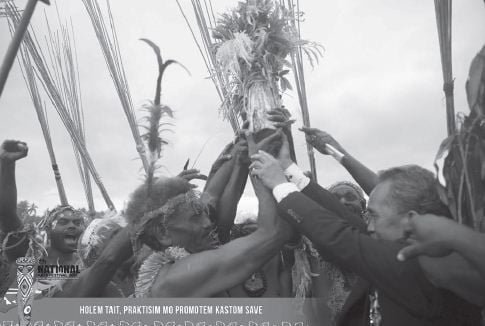 4th NAF Closing Ceremony, handing over of ‘Stik Faea’ from Malampa to Tafea

WHY have Agricultural and Cultural Festivals been celebrated separately since Independence? Hasn’t it dawned on us yet that these are part of the very same ancestral history that mark our common identity as a people?

CULTURE is our identity.

It delineates, defines and describes who we are and why we are called ‘Ni-Vanuatu’. AGRICULTURE reflects our ways of life – past, present and future.

These sentiments resounded heavily from the mountaintop of our national leadership during the 4th NAF which concluded last Friday when the ‘stick faea’ was handed over to Tafea province – the next host.

The next national arts festival will be held in 3-5 years time.

But I did not call it the 5th NAF because of an interesting discussion that’s already cooking in the background.

On the occasion of Prime Minister Charlot Salwai’s visit with us at the 4th NAF last week in Lakatoro, my assistant and I had the golden opportunity to discuss ‘Culture and Agriculture’ with him in a very relaxed atmosphere after a beautiful lunch of fresh local dishes.

Thoughts and views as expressed during the discussion are captured throughout today’s article.

Let me begin with a brief background look at the word ‘Agriculture’. AgriCULTURE is inseparable from a country’s culture.

The Food and Agricultural Organisation of the United Nations (FAO) fully recognises this vital linkage (refer article entitled ‘Accenting the “culture” in agriculture’ on the FAO website at this link: http://www.fao.org/inaction/ accenting-the-culturein- agriculture/en/).

Technically, agriculture is ‘the science and art of cultivating plants and livestock’. Long before it ever had anything to do with income generation, agriculture was ‘a way of life’ associated with different cultures the world over. The FAO defines these as Globally Important Agricultural Heritage Systems (GIAHS) which have been derived from different indigenous cultures, handed down through various generations and ‘contribute to local foood security, natural resource management and the conservation of genetic diversity’.

But the FAO warns, ‘unfortunately, their survival is at risk as a result of modernization’. We need to elevate the visibility of these food systems that have sustained our cultures in the past and to safeguard the ways of life which have kept our forefathers throughout history, thus ensuring their resilience and stedfastness through different climatic changes and challenges This was the core theme of the 4th NAF hroughout the weeklong celebrations last week.

Festivals are a great way to celebrate and promote values which are being eroded and fast disappearing due to modernisation and urbanisation.

Vanuatu has celebrated numerous festivals, agricultural and trade shows and fairs ever since Independence.

In late 2016 this writer introduced another version to the list, the first ‘Agri-Tourism’ Festival combining agriculture and tourism.

A very close friend who followed the 4th NAF sent an email last weekend to say he ‘enjoyed’ it ‘immensely’ from the comfort of his home, and concluded that he had a glass of wine to celebrate what he felt was a fantastic event.

But I think the best is yet to come – when Vanuatu learns to celebrate its uniqueness through a combined event recognising the inseparable linkage between culture and agriculture together with their modern counterparts – industry, trade and tourism.

That day is coming.

Following the discussion with the Prime Minister I called aside two senior Directors of MALFFB who were at the 4th NAF and shared this ‘vision’ with them.

Then at the end of the weeklong festivities the Director of VKS was taken on that journey of thought. They all expressed a keen interest to consider that approach.

It is an approach to doing things a bit ‘business-unusual’, but seems to be the best way forward to providing a well rounded and balanced perspective on our development efforts.

When analysed from all angles – cost, participant time, resource-sharing and value chain connectivity – a combined festival of our cultures, agriculture and all makes a lot of sense.

For instance, a lot of the ‘kastom’ people who attended the 4th NAF are farmers themselves, as I was told by another senior Government official from Climate Change who had met separately with the same two MALFFB Directors during 4th NAF week.

This therefore begs the question, why duplicate efforts and costs when we can celebrate all these important development undertakings jointly and in a far more holistic way?

On the tourism front, after 39 years of trying to engage in unsustainable modern tourism practices, we have come to our senses and introduced a new ‘Sustainable Tourism Policy’ (2018-2030) which was launched by the Government in February 2019.

Congratulations to our tourism leadership.

Of the docume n t ’ s ‘shared values’, culture features prominently and the words ‘culture’, ‘kastom’ and ‘traditional’ appear 36 times throughout the entire document. We are thinking and planning in the right direction.

From a health perspective, agricultural shows and fairs are fine in themselves, but these fail to connect people to traditionally healthy styles of food preparations which were showcased beautifully at the 4th NAF.

Modern agriculture cannot pretend to be independent from our cultural ways of cooking.

Food tourism on the other hand caters for the visitor market, but cultural methods of food preparations address the mass population of our locals who are in danger of attracting NCDs. There is so much to learn.

A solid week long celebrations combining culture, agriculture, tourism, industry, and trade will not be hard to organise.

In fact there will be more than enough content to make it a fantastic promotional event to advance Vanuatu’s cultural and economic development efforts.

The Head of Government has shared his vision and preference for it. I believe other national leaders will buy into it. Common sense tells us this is the most appropriate way to go. So let’s make it happen. Can’t wait for that day.