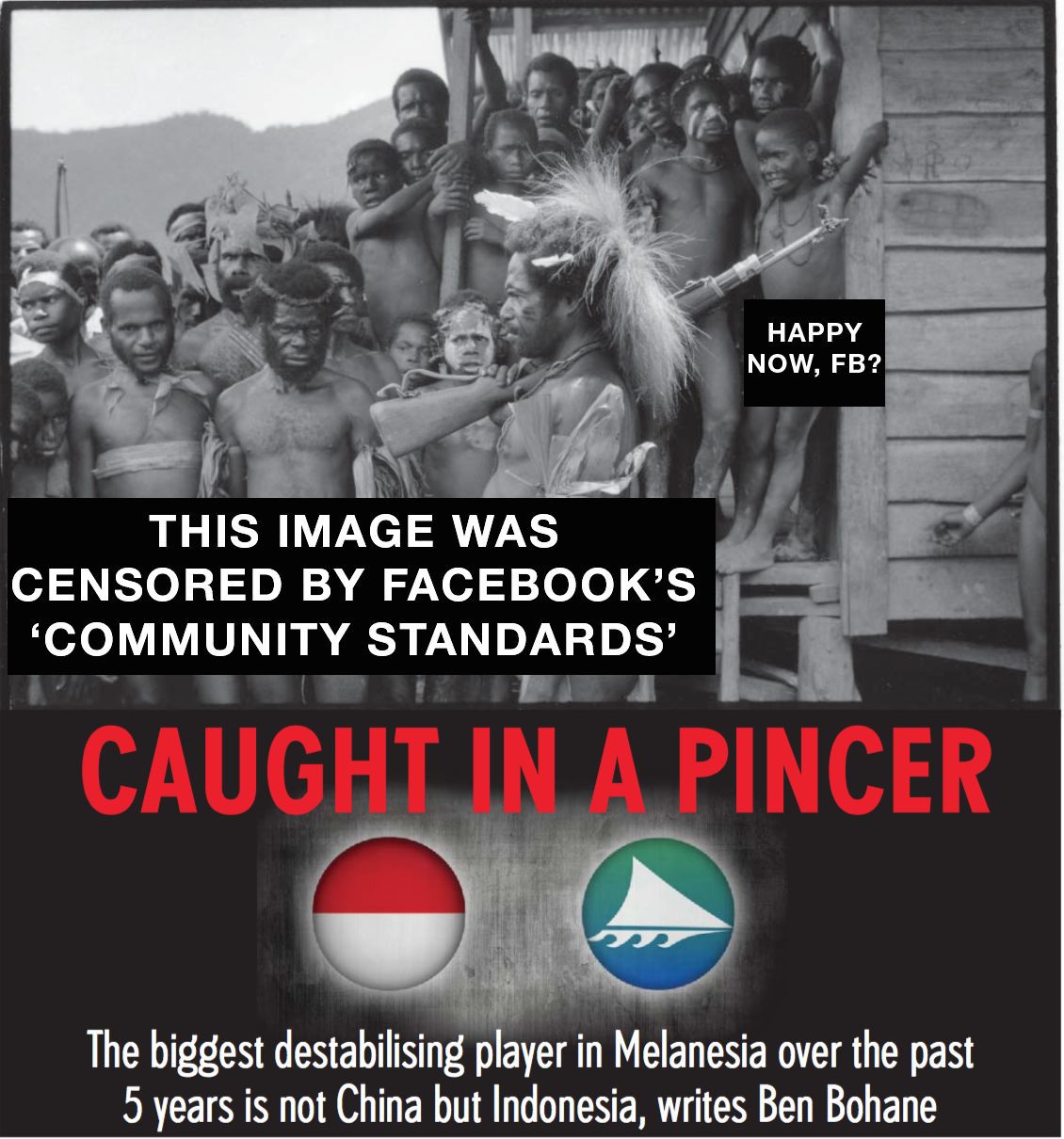 The original version of this image, which ran in our weekend newspaper, was deemed to have breached Facebook's 'community standards'. 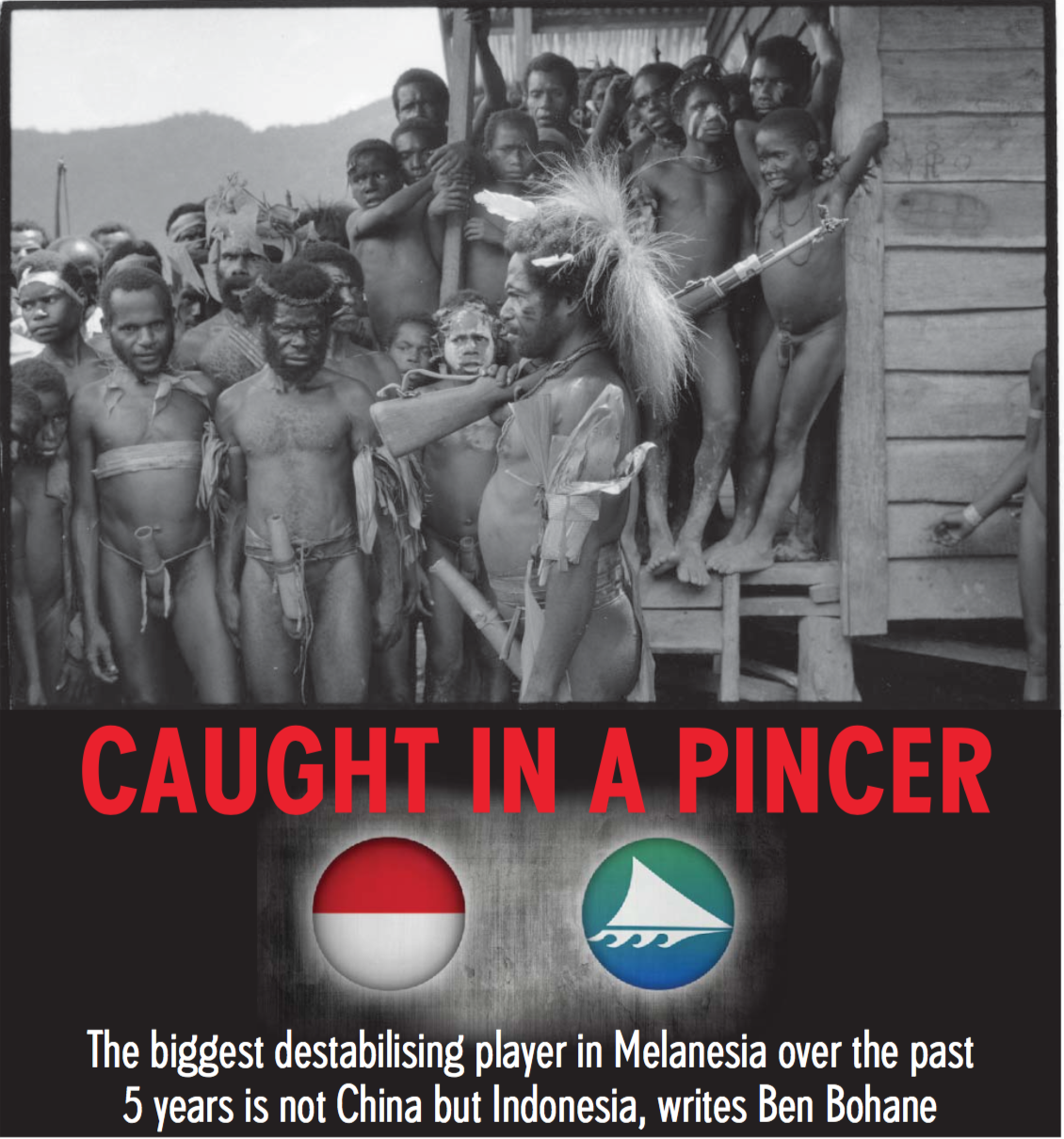 The original version of this image, which ran in our weekend newspaper, was deemed to have breached Facebook's 'community standards'.

All the talk is of increasing Chinese influence in our region. But this is to wilfully see past the elephant in the room.

Contrary to most commentary, the biggest destabilising player in Melanesia over the past 5 years is not China but Indonesia, which through its “look east” policy has deliberately paralysed the Melanesian Spearhead Group (MSG) while financing local MPs and political parties across the Pacific to try and stop snow-balling regional support for West Papuan independence.

Indonesia already has Peter O’Neil onside in PNG, and Frank Bainimarama in Fiji, and is busy trying to neutralise Vanuatu, the Solomons and FLNKS leaders in New Caledonia, who are resisting Indonesian influence.

The reason Vanuatu and other Melanesian nations may be turning to China is because they are more worried about Indonesia, which has directly threatened Vanuatu over its strong diplomatic support for the West Papuans. Vanuatu might be pulling some "muscle" into its corner, feeling it can't rely on Australia because Canberra continues in its supine support of Indonesia whatever they do - even as Jakarta directly undermines Australian and Pacific island interests.

The accumulative “strategic failure” being talked of by Labour’s Richard Marles and others, is not because Australia has failed to check Chinese influence in Melanesia, but a result of Australia’s failure to check Indonesian interference in these nations that were supposed to be “our patch”. For decades, islanders thought their “big brothers” Australia and America would defend Pacific peoples as they did in World War Two. Instead, it appears Australia has outsourced its security of Melanesia to Indonesia, giving them free reign.

Despite being a Melanesian nation itself through its own Torres Strait and South Sea Islander communities, strangely Australia has not sought to join the main political grouping of its own neighbourhood, the Melanesian Spearhead Group (MSG), which has now been hijacked by Indonesia with help from Fiji in particular; more blow-back from Canberra’s misguided attempts to isolate Fiji after the coup.

It is not lost on the region that while the Turnball government is warning about Chinese influence, senior members of his own party have been taking Chinese coin, from former Foreign Minister Alexander Downer spruiking for Huwei to recent Trade Minister Andrew Robb now working for the same Chinese company that controversially bought Darwin’s port. Still, as examples like Sri Lanka demonstrate, Australia is right to flag concerns about strategic vulnerability that comes with excessive debt to China.

From a Melanesian perspective, the two biggest security issues they face are climate change and Indonesia's increasing political interference across the Melanesian archipelago, rooted in its desire to hold onto West Papua. Despite the mantra from Foreign Minister Julie Bishop that Australia remains the “strategic partner of choice” for Vanuatu and the region, the fact is that Canberra is not listening to Melanesia's own security concerns, but telling them what they should be concerned about, ie China. This is not going down well and Melanesian nations are forging their own security arrangements with or without Australia, who they see as compromised when it comes to climate change and Indonesia.

In the past few months we have witnessed something of a “pincer movement”. In late December RAAF jets were suddenly scrambled from Tindal air base near Darwin after a number of nuclear-capable Russian Tu 95 “Bear” bombers flew from Biak in West Papua, flying between Papua and Australia's north for intelligence gathering purposes. It's the first time Russian bombers have operated like this in the South Pacific and suggests Jakarta wanted to warn Australia and the US forces parked in Darwin that it too could bring some “muscle” into the neighbourhood. That message was likely aimed at China as much as Australia and the US.

Then last week, at the other end of Melanesia we have revelations about a potential Chinese military base in Vanuatu. The first thing to say is that it’s highly unlikely China would have asked for a military base - they are far too subtle to do that. More likely is that they may be angling for something dressed up as a civilian project but with military applications, like the “space station” speculation floated in the Chinese press last week. They have already built alot of dual-use infrastructure in Vanuatu such as the big Santo wharf, so step by step, like their “salami-slicing” strategy in the South China Sea, they will move incrementally without wanting to frighten the horses.

Both of these pincer moves have their origin in West Papua's situation. In some ways it reflects Paul Dibb’s reworking of Australian defence policy in the late 1980s to get beyond its Euro-centricity. Dibb offered a map with concentric circles emanating out from Darwin. The first circles cover East Timor and West Papua.

There are strategic consequences to Australia’s 50 year policy of not just turning a blind eye to Indonesia's ‘slow-motion genocide’ in West Papua, but active involvement through its Densus 88 anti-terror unit, which many Papuans accuse of not just targetting Islamic militants, but Papuan nationalists too. At a time when Canberra is battling jihadis in the Middle East and the Philippines, it appears unconcerned by jihadi activity and Indonesian military collusion right on its doorstep, or a possible Prabowo government elected next year, backed by Islamist groups. Those of us who witnessed Indonesia's bloody use of proxy militias in East Timor have watched the same apparatus move to West Papua, with the same man - General Wiranto - still in charge.

There was a time when the Menzies government in Australia supported Dutch plans for West Papuan independence throughout the 1950s and early ‘60s until the US twisted arms to accept Indonesia control because of cold war politics.

There was a time when the Australian Defence Force (ADF) worked with the PNGDF to actively secure its 800km border with Indonesia. Today the border is wide open and sources within PNGDF intelligence continue to complain that the Indonesian military routinely violate PNG sovereignty with their patrols, up to a dozen times per year, sometimes even moving the border marking pegs. How can Australia be perceived as PNG's security guarantor when it doesn't even help them secure their primary border, especially with the growing threat of jihadi infiltration? Why has the AFP been given priority over the ADF in terms of security across Melanesia? With no more engineering battalions or ADF army advisors present in camp, China has walked right in. The last ADF army advisor to Vanuatu, Major Paul Prickett, left 10 years ago and wasn’t replaced.

Many years ago I spent some time with Dick Hagen, a legendary coffee plantation manager in the highlands of PNG, who has been there since the 1950s. He told me how in the 1960s and 70s, he and many Australians living in PNG were given basic military training so they could be a first response "militia" should the Indonesians come over the border and invade PNG. For decades the PNG-Indonesia border was regarded as Australia’s real frontline. It was another potential “Kokoda” which didn’t happen, but Indonesia has found other ways to extend its reach.

Mohammed Hatta, one of the founding fathers of Indonesia, warned his nation against taking West Papua, saying Indonesia might not stop until it got to Fiji. That is now coming to pass. But ironically, it is China that will likely contain Indonesia's expansion in the region, not Australia.

I have the sense that some sort of deal was struck between Canberra and Jakarta back in the 1970s; that Australia would turn a blind eye to everything west of the border while Indonesia would not interfere in PNG and anything east of the border. Australia has naively kept its part of the deal while Indonesia clearly has not. As a result, in the social media age when all the Pacific is now aware of climate change and what Indonesia continues to do in West Papua and beyond with tacit Australian support, Australia and the US are losing the moral - and actual - leadership of the region.

China is the result.

But it is worth remembering that Australia does much to support Melanesia in other important areas, has been a generous neighbour and will always be there for the islands in tough times. To the keyboard warriors on social media always blaming Australia for what has happened in West Papua, they would do well to understand the history; that it was US and UN decisions that sealed West Papua’s fate. Australia and Holland initially supported their independence. Why would Australia again risk war with Indonesia over West Papua when Melanesians themselves have not united to bring the West Papuans fully into their family? It was the MSG which let the wolf into their house, not Australia. As someone who was there in the first weeks of East Timor’s bloody liberation, amidst the burning buildings and bodies, it was an Australian-led coaltion which secured East Timor. I remember wondering where are the Melanesian forces to assist and show solidarity? No PNGDF, no VMF or Fijian forces during the critical phase.

Australia must now find a strategic balance among its ‘frenemies’ Indonesia and China. That begins with deeper engagement with the islands, leadership on climate change and working with Melanesian leaders to address their security concerns as much as Australia’s. Only by listening and closer co-operation with Melanesian leaders can Australia assist with a robust defence of the Melanesian archipelago from Timor to Fiji and be seen as Melanesia’s “security partner of choice”.

Ben Bohane is a photojournalist and tv producer based in Vanuatu who has specialised in reporting war and religion for nearly 30 years across Asia and the Pacific.

CAUGHT IN A PINCER