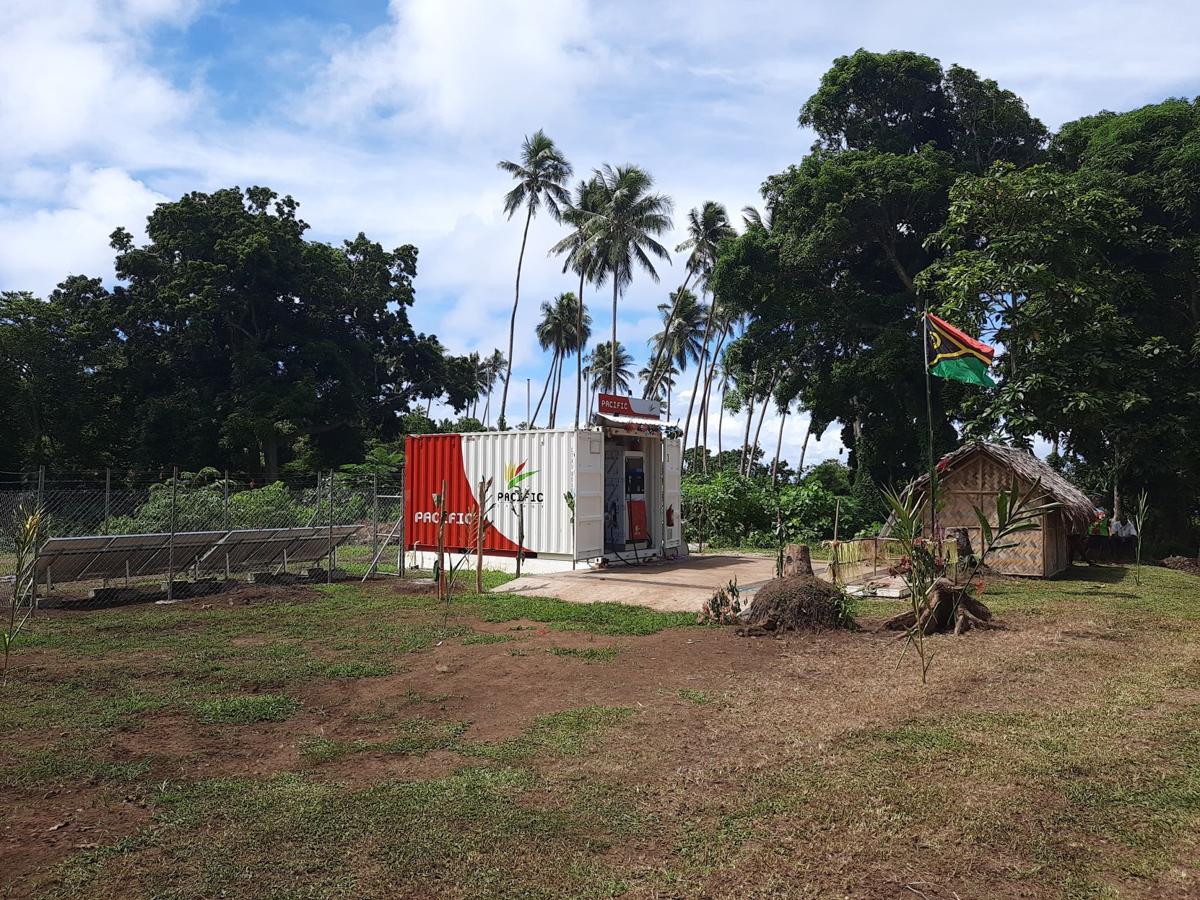 Minister for Tourism, Trade, Commerce, Cooperatives, Industry & Ni-Vanuatu Business, James Bule, said the cooperative system is the only way where ni-Vanuatu can work together and venture into business in a communal way that is compatible with Vanuatu’s cultural way of life.

“With Cooperatives...no one is left behind,” Minister Bule said in his speech while he was officially launching the Gaua Fuel Station in Aver Bay, on Tuesday, February 16th, 2021.

The Sola fuel Station is owned and ran by the Sola Petroleum Cooperative that is comprised of 35 shareholders that injected VT150,000 each. They kicked off with a capital of more than VT5.2 million to acquire the fuel pump and container as well as the solar panels to power the fuel pump.

Minister Bule pointed out that with the Cooperatives system, there is a sense of fair sharing amongst the members of the coop.

While in Aver Bay in Gaua, Minister Bule and the President of TORBA Provincial Government jointly handed over the official certificates of registration to the Gaua Kava Growers Coop and the Gaua Petroleum Coop as two established cooperatives in accordance with the Vanuatu Cooperative Act.

In his speech, the President of the Torba Provincial Government announced that the Province has already started talks with the Department of Cooperatives to help the province acquire a ship sometime this year or in 2021.

He emphasized that the acquisition of a ship will tremendously help this remote northern province in terms of regular shipment of goods from Santo to Torba and it will also help to sustain other projects such as the fuel stations and others.

The Gaua Vatsur Council of Chiefs also verbally requested the Government of Vanuatu to build a permanent wharf at Haver Bay on Gaua.

The Vatsur Council of Chiefs officially handed over the petition to Minister Bule.

Mr. Bule responded that the request was justified and that he will personally hand over the petition in question to the Council of Ministers for consideration.

Minister Bule and his delegation then left Gaua by charter plane to Sola, Vanualava where they spent a night.

On Wednesday morning, February 17th, 2021, after the welcome ceremony and the custom dances, the welcome speech was given by the Secretary General of Torba Province, and the President of the Province, Edmond Harry.

Minister Bule once again reiterated in his official speech the importance for Ni-Vans to work together and establish cooperatives and venture into businesses.

He congratulated the SG and the President of TORBA Province for their leadership and for making Torba Province, one of the most performing provinces in the country.

“Although this province is remote and isolated, with your leadership, you are taking ownership and driving all the government policies on the ground here in TORBA,” said Minister Bule.

“We commend you for that.”

He also praised TORBA province for working closely with the government departments and the stakeholders as well as the leaders of communities and islands within their province to make sure that projects such as the establishment of Cooperatives can happen on the ground.

The consultation and negotiations in regard to the establishment of the fuel station cooperatives on Gaua and Sola were initiated by TORBA Province with Pacific Petroleum and the shareholders on Gaua and in Sola.

The TORBA Provincial Government also financially participated by covering the costs of the floor slap of the Sola and Gaua Fuel Stations as well as the transportation costs of the building materials from Santo to Gaua and Vanualava is estimated at around VT1 million.

Minister Bule and the TORBA Provincial President, Edmond Harry also handed over the certificate of registration of cooperatives to the Sola Public Servant Association and the Sola Petroleum Station Coop that comprises 38 shareholders.

Mr. Bule and Mr. Harry also unveiled the Sola Handicrafts Cooperative road sign in front of the Sola Market House where the Handicraft Coop is located.

He emphasized that the Government through the Ministry and Department of Cooperatives are encouraging all the communities in all the urban centers and all our rural communities to work together to revive coops around the country.

“We are encouraging Ni-Vanuatu to gather together and establish new cooperatives in the municipal wards as well as in all the regions in our 6 provinces.

“Cooperative is the only way we can succeed in business today.

“I always say that the coop system is the second Vanuatu National Provident Fund.

“We only receive our full contribution from the VNPF after 55 years when you retire.

“But with the cooperatives, you receive your share at every end of a financial year,” Minister Bule said.

He concluded that if the Ni-Vans were organized in Cooperatives, and only spend their money in coops which they are a part of, they would get more benefits, and the coops will be very successful.

And subsequently, foreign-owned businesses that are currently operating wholesale and retail businesses would face tougher competitions if there are big cooperatives in urban centres.