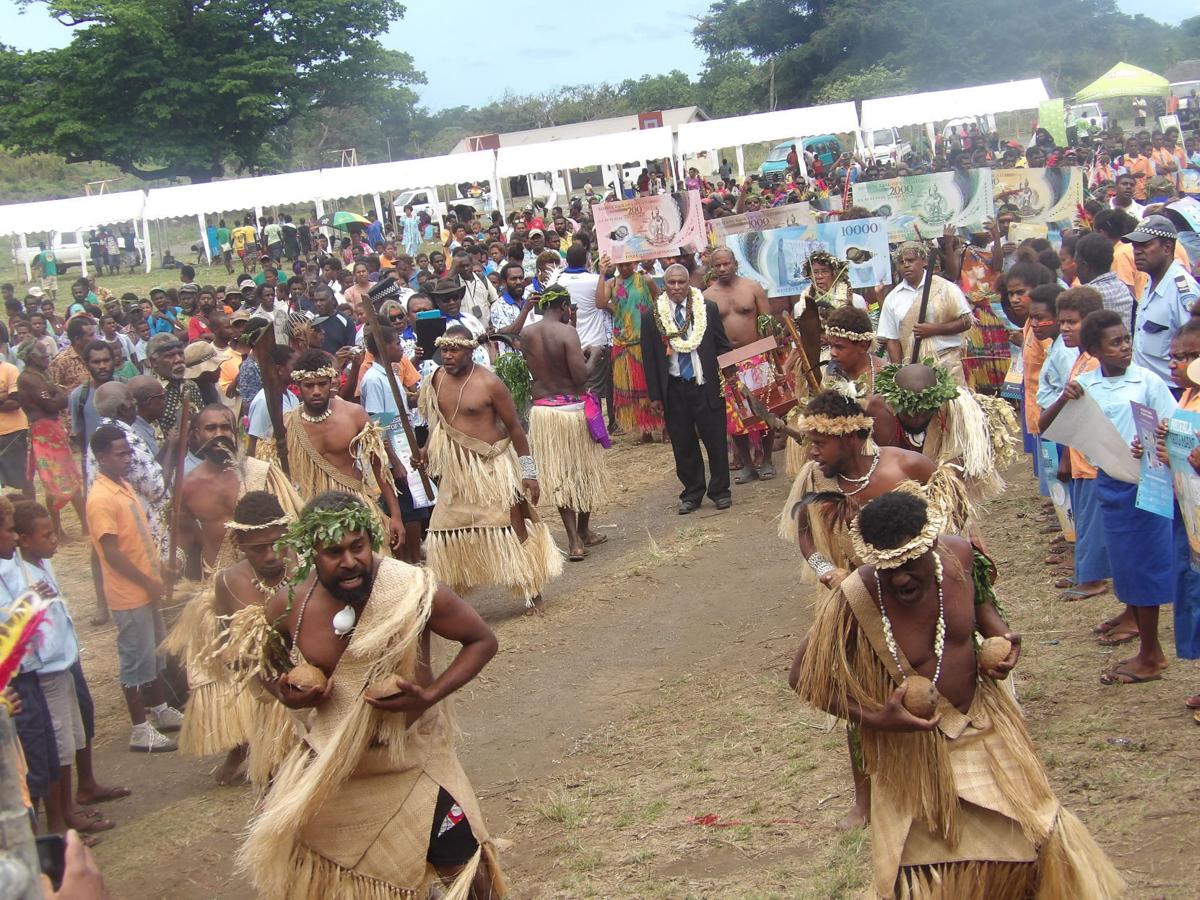 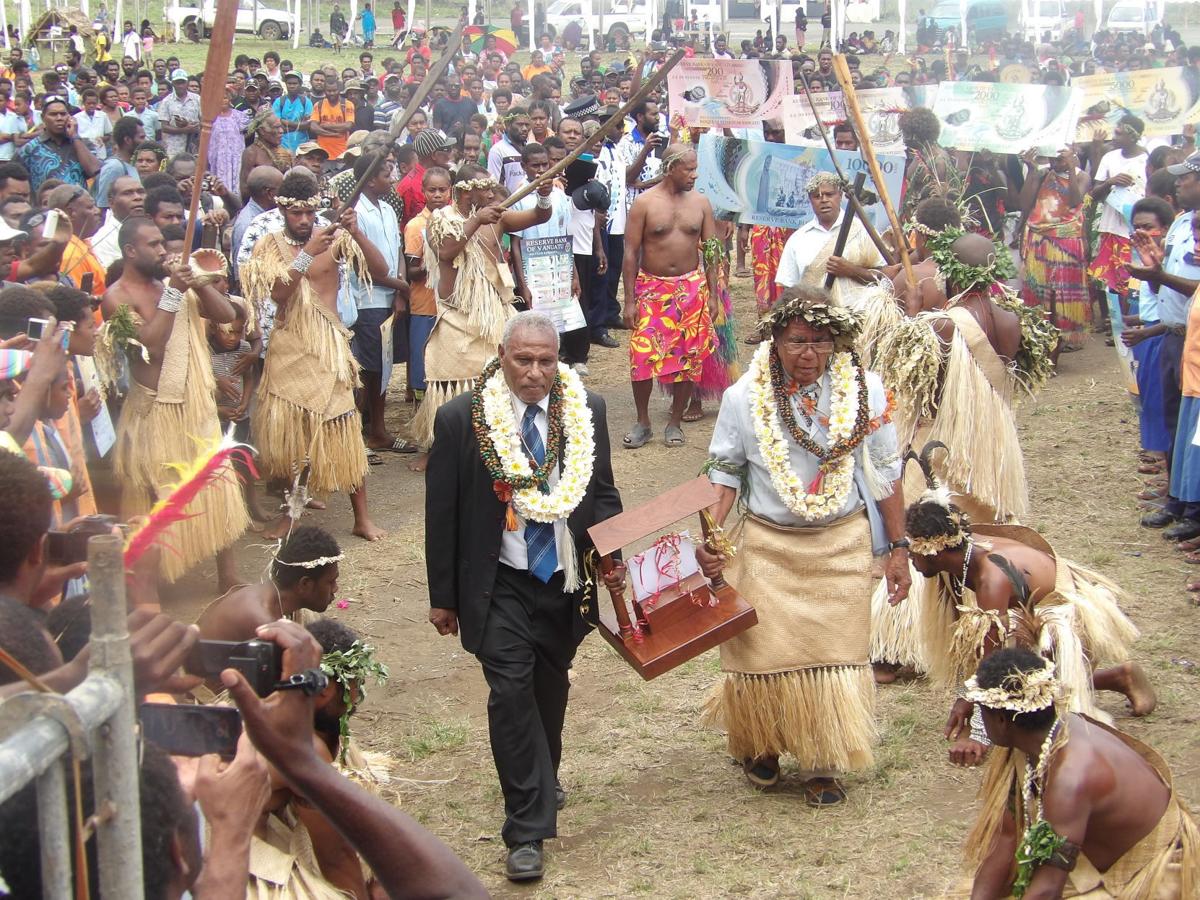 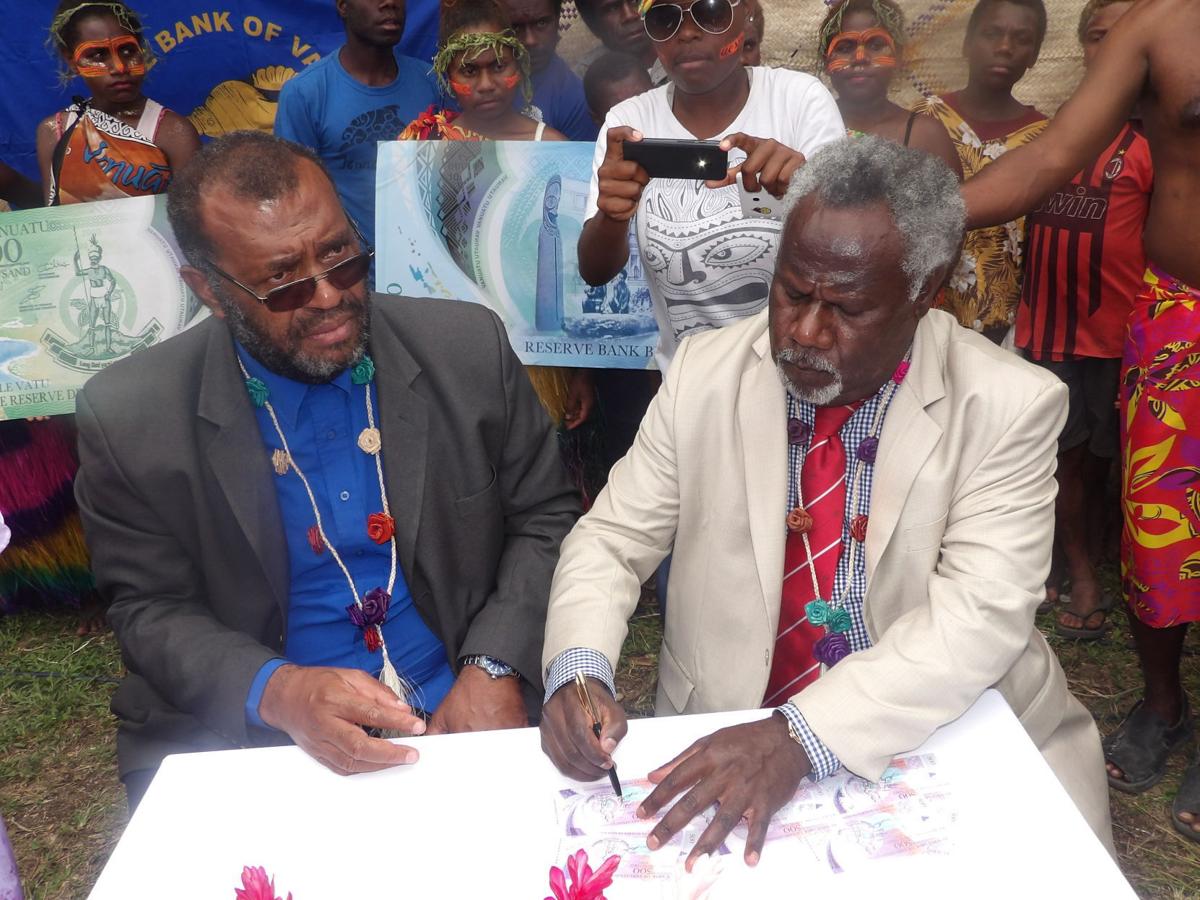 Governor signs note after Minister of Finance (left) has signed

Governor signs note after Minister of Finance (left) has signed

The decision to launch the final Vt500 polymer note at Laminu Stadium at Lenakel last Friday, has been welcomed by all stakeholders on Tanna, as the best indication by the Government and the Reserve Bank of Vanuatu (RBV) that they recognise the vibrant economic power that is injected by the Southern Province in particular, the island of Tanna, to the national economy.

President of Tafea Province Jeffrey Kaut welcomed all the invited guests to the day of celebrations.

The Head of State, Obed Moses Tallis and First Lady as well as former Head of State Iolu Abbil and his wife all graced the ceremony.

The RBV sent a powerful delegation to the launching ceremony complete with all Heads of all the Departments and Committees responsible for the Vt500 note. Even a representative of the Note Printers from Australia was present.

RBV Governor Athy labelled the ceremony a special occasion for three reasons; to launch the final new bank note at Lenakel, the new note features custom and third the Head of State was present for the ceremony.

The Governor turned to the President to personally welcome him to Tanna as he was invited by RBV to award two medals to the first former Chairman of the former Central Bank of Vanuatu, Pastor Philip Shing and former Governor of RBV, Andrew Kausiama.

The Vt500 note also depicts custom and Governor Athy said it was only proper to be launched on the southern island because the people of Tanna are culturally dynamic.

The Governor repeated the Deputy Prime Minister, Joe Natuman’s words spoken a day earlier that when Captain James Cook sailed into Port Resolution in 1774, a Tannese paddled with fresh garden produced to trade with the ship.

“This historical record shows that even before the arrival of western education to the islands, our people already knew how to trade,” Governor Athy said.

“Look at the powerful spirit of trade and business in Black Man Town today; I think the initial idea to trade started back then.”

Furthermore he praised the Tannese people for their strong mentality to do business and encouraged them to continue with the trend.

With the completion of the new note series, the Governor said it is now time to “look into other ways” with new policies to empower the ni Vanuatu.

He would like to see the RBV work with its partners on relevant guidelines how to empower indigenous people to take development forward.

RBV has written to the Government recommending the setting up of what he called “Tier Two Financial Institutions”, to cater for the country’s new dawn on its graduation from Least Developed Country (LDC) status.

At the end of the day he said everything falls into one goal which is to build up the economic capacity of the country through “one inclusive fashion” which sees all indigenous people go for development.

He called on all partners in Government as well as development partners to work closer together.

“On the other hand, the Government must work faster and smarter to complete its strategic infrastructures in the islands to help medium size pilots unlock their potentials to help those islands focus on their comparative advantage,” he stressed.

Tanna has a strong tourism potential.

“While at Evergreen, I saw tourists arrive while others leave every day. Now if we can have two flights to Tanna a day, that would be great,” he suggested.

The Governor said the ceremony would not have been possible without the involvement of the President of Tafea Province and Acting Secretary General, and Central Government.