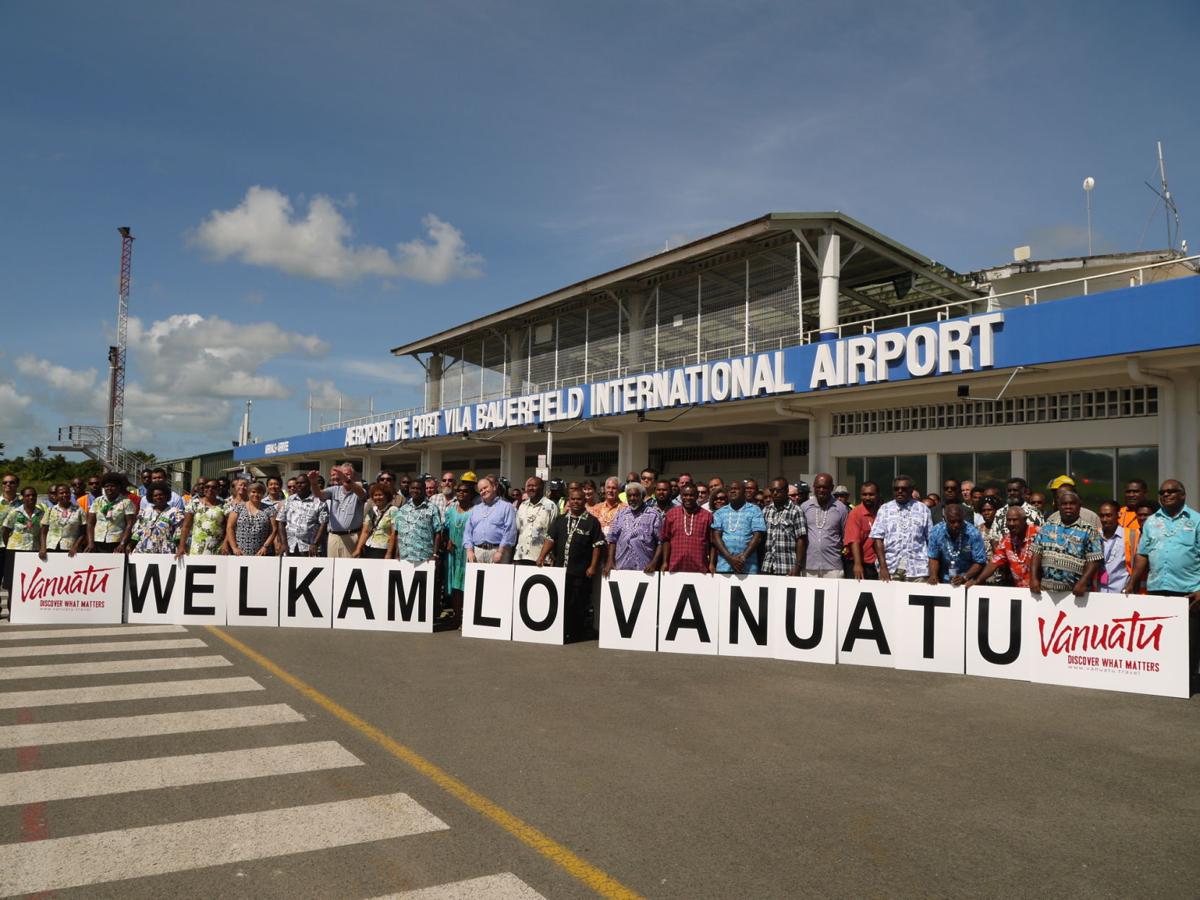 put up placards in front of the terminal welcoming visitors to Vanuatu. 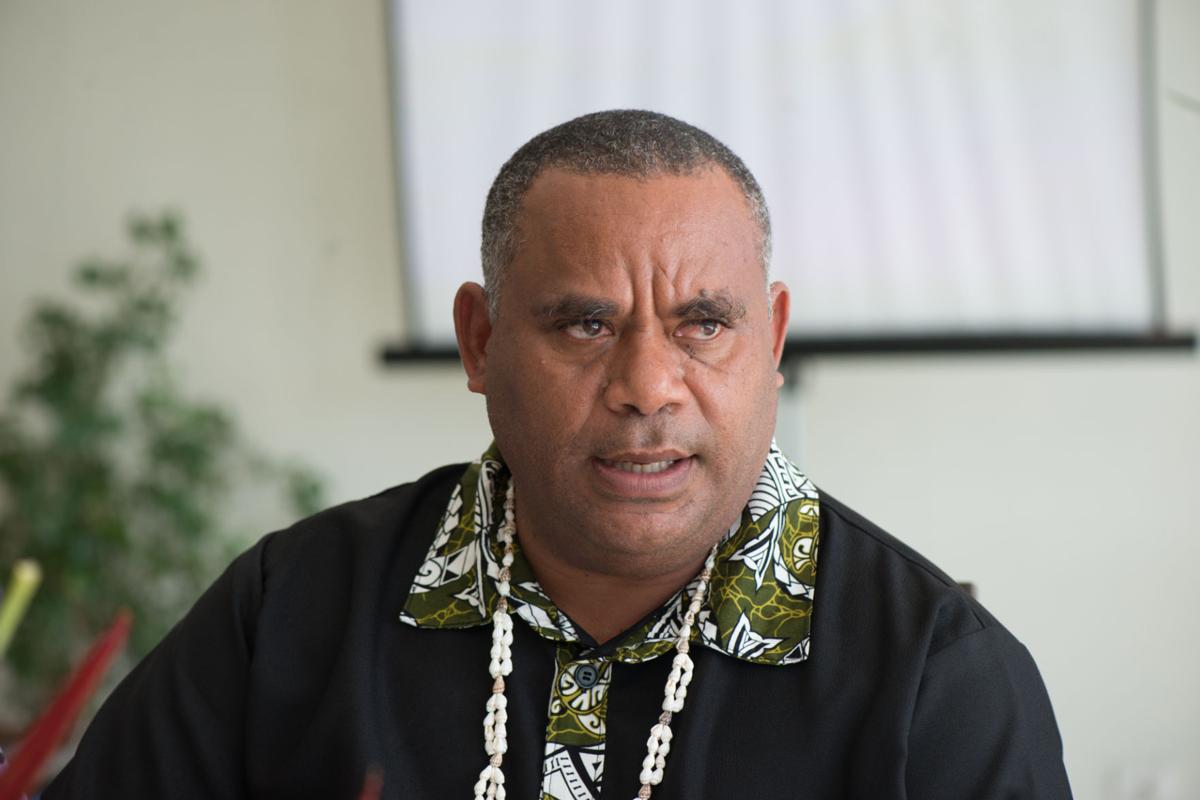 Minister Jotham Napat answers questions from the press at an event celebrating the successful completion of emergency repairs to the Bauerfield runway.

put up placards in front of the terminal welcoming visitors to Vanuatu.

Minister Jotham Napat answers questions from the press at an event celebrating the successful completion of emergency repairs to the Bauerfield runway.

Infrastructure and Public Utilities, Jotham Napat, has announced that Virgin Airlines Australia have written to him to say they will resume operations into Port Vila’s Bauerfield Airport from May 23, 2016.

He made the most-anticipated announcement at the official ceremony for the completion of the Bauerfield runway phase 1 repairs at the VIP lounge of the Port Vila airport Thursday morning.

However, the minister stressed that Air New Zealand have clearly advised they will not resume flights until phase 2 rehabilitation works is activated.

He added that he has begun consultations with New Zealand High Commissioner in Vanuatu, Georgina Roberts, and Air New Zealand to see if the airline could change their position.

Minister Napat said he could not say exactly at this stage when phase 2 repair works on Bauerfield Airport runway would start, but he expected it to be before the end of this year.

Air NZ, Qantas, and eventually, Virgin Australia, all suspended flights to Bauerfield in January due to on-going concerns about the condition of the runway at the Port Vila International Airport.

Napat emphasized government’s determination to enhance economic and tourism growth by looking beyond traditional markets and targeting the Asian and China markets directly.

“At the end of February, the Council of Ministers decided to upgrade Pekoa Airport in Luganville, Santo, to accommodate long haul flights.

“And the Council of Ministers on April 21, 2016 decided that Bauerfield is to be upgraded to full Code E long haul requirements.

“Government has directed a taskforce to finalize negotiations with the World Bank on the $US59.8 million (Vt64.8 billion) Phase 2 Loan for Bauerfield’s upgrade from Code C and Code E enhancement to full Code E upgrades.”

This funding would be used to upgrade the runway, taxiway and aprons including navigation aides to full code E as well as increasing Fire Safety Equipment from Category 7 to Cat 8. And this upgrade of Bauerfield would mean the airport would possess a Code E runway capable of accommodating Boeing 787 and Airbus A330 aircraft.

“The company started the work on February 10 and took 11 weeks to complete the short term repairs, which is a very good achievement.

“This is just the tip of the iceberg because there is more work to be done.”

He thanked the government for its commitment to seeing the airport runway repaired.

He highlighted that lessons have been learned from this painful experience and he hoped it would not happen again.

CEO Rakau pointed to inaction on fixing the deteriorating condition of the airport that led to some overseas airlines suspending flights to Bauerfield International Airport.

Director of the Civil Aviation Authority of Vanuatu (CAAV), Joseph Niel, emphasized that this SEST cover on the runway would last for only 12 months or a little more.

He called on the Government and all stakeholders including AVL “not to put the country in the same mistake again”.

Tourism Private Sector Representative, Bryan Death referred to Bauerfield as not only an airport but also a livelihood of all the people in the country. He said the private sector will support the government for the permanent runway surface to be in place.

“What happened in the last 15 months in Vanuatu was not good news (together with Tropical Cyclone Pam), but the next 12 months will be positive starting with the reopening of Iririki Island Resort tomorrow (today), reopening of Holiday Inn on June 1, promotion of Vanuatu as a tourism destination due to start by the Vanuatu Tourism Office and Air Vanuatu introducing additional flights to Australia and New Zealand,” he added.

Deputy Prime Minister and Minister for Commerce, Tourism and Trade, Natuman didn’t mince words, calling the problem a “human disaster caused by neglect by successive governments to deal with the deteriorating condition of the Bauerfield runway”.

“The result of which airlines pulled out of the country, the tourism sector badly affected and the government lost revenue. It was a hard lesson learned.

“But the completion of this Phase 1 rehabilitation work is significant because it has come at a peak tourist season which is April to July,” putting a positive spin to a situation.

Natuman congratulated the tourism sector for their perseverance, pointing to the reopening of Irikriki Island Resort today, Holiday Inn on June 1 and the work of other resort owners.

Following the official part of the ceremony everyone present, about 100 in all, joined in a group photo at the Bauerfield tarmac to welcome airlines and visitors to Vanuatu.