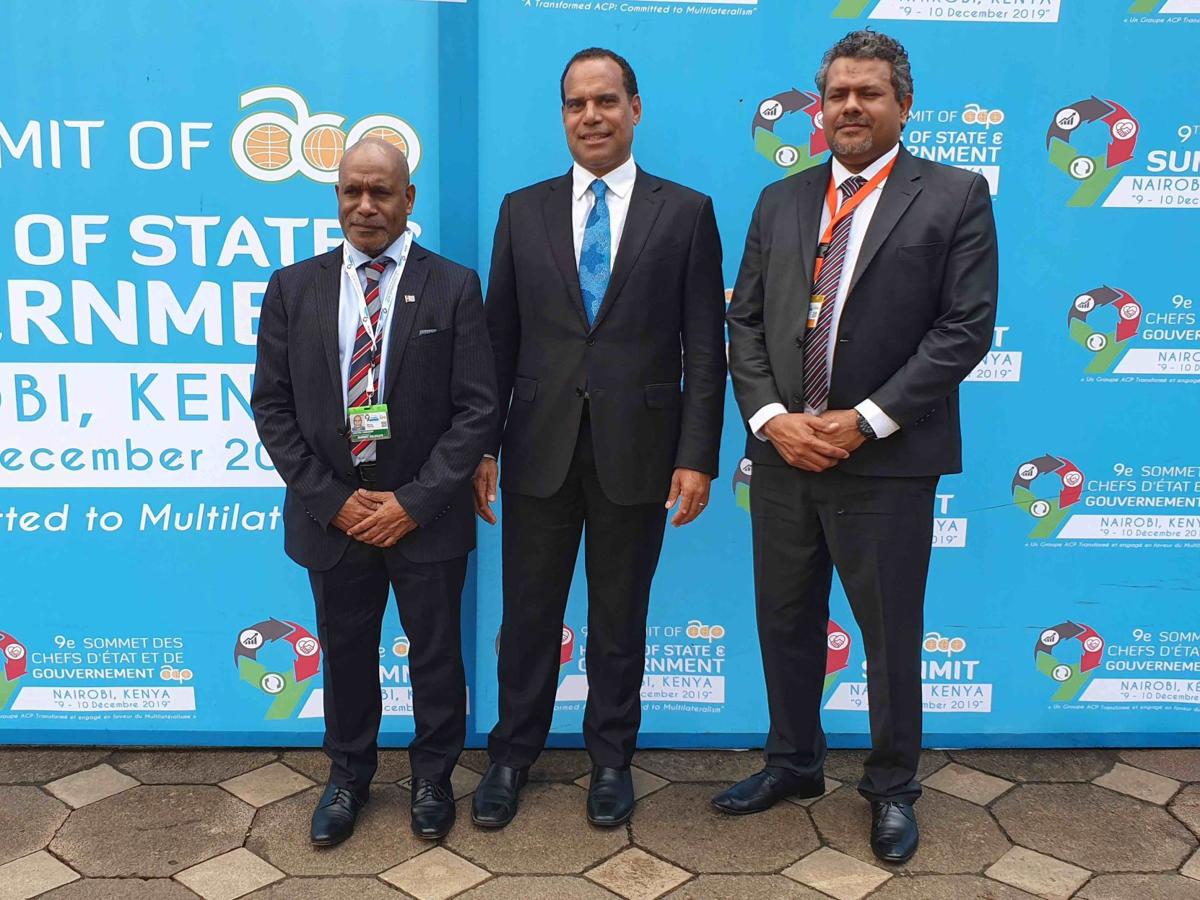 Minister of Foreign Affairs Ralph Regenvanu has voiced Vanuatu’s concern over the ongoing bullying tactics and asymmetrical manner in which the EU has taken on the revised list of so-called ‘Non-Cooperative Tax Jurisdictions’.

Minister Regenvanu represented Vanuatu at the 9th ACP Summit this week in Nairobi, Kenya, accompanied by Vanuatu’s Ambassador to the European Union and the ACP, John Licht.

“ACP” stands for “Africa, Caribbean, Pacific”, and comprises all former colonies of the countries that are now part of the European Union – the United Kingdom, France, Germany, Belgium, the Netherlands, etc - in these three regions.

It was at the ACP Council of Ministers meeting on Sunday 8th December that Minister Regenvanu made a statement on behalf of the Pacific states concerning the EU’s listing of Vanuatu and other Pacific countries as a “Non-Cooperative Tax Jurisdiction”.

He echoed the sentiments already expressed by his colleague Ministers on this matter.

“The Pacific has reiterated its strong concern about the unilateral stance taken by the EU as the Cotonou Agreement partner not to consult a priori with us before adopting its list of non-cooperative tax jurisdictions,” Minister Regenvanu said.

“Article 12 of the Cotonou Agreement provides space to consult prior to taking any further steps or measures. The listing is going against the spirit of the Cotonou Agreement and this Article in particular. Vanuatu commends the establishment of the Ad Hoc Group ACP Ministerial Contact Group on Tax Matters and the Resolution adopted during the May 2019 ACP Council of Ministers meeting held in Brussels.

“We are however discouraged to learn of the ongoing bullying tactics and asymmetrical manner in which the EU has taken on the revised list of so-called ‘Non-Cooperative Tax Jurisdictions’ of which Vanuatu is also part along with a number of Pacific countries including Samoa, Fiji and the Marshall Islands.

“The time given for our small and vulnerable economies to respond to these stringent EU measures by the EU Code of Ethics Committee and the sheer ignorance of our plea for political dialogue and closer co-operation at the ACP-wide level on addressing the issue of ‘non-cooperative’ tax jurisdiction goes against the grain of our mutual partnership and commitment which the Pacific for one has demonstrated positively so far under the ongoing negotiations of a new Post Cotonou treaty and a Pacific Regional Protocol, all of which has also placed us under tight commitments back-to-back with our ongoing efforts at the domestic level.

“We are continuing to undertake reforms and changes to our relevant tax laws and regulations, however we are still in the dark as to how these assessments are arrived at and under what level of independent scrutiny they are made – for example, as we have had to also concurrently address OECD measures on tax.

“We find ourselves victims with great economic loss across the region, at the whim of the EU deciding when and how to raise its standards and yardsticks as a measure to deter or safeguard itself against much more serious and unprecedented activities relating to non-cooperative tax jurisdictions.

“Vanuatu therefore wishes to once again register its utmost disappointment on the new assessment and report released on 14th October by ECOFIN and protest strongly on the sheer lack of sensitivity on how this report continues to place our small vulnerable economy under negative publicity globally.”

Vanuatu on behalf of the Pacific ACP member States also strongly urges the EU to engage in a more proactive and constructive manner with the ACP group on the EU measures being implemented, with clear short and long term technical assistance aligned.

“This should include training and capacity building where so required to assist the members out of the 'black list',” Mr Regenvanu said.

“Whilst we concur fully to the need for dialogue at the political level, given our small and vulnerable economies with varying specificities, we believe it is critical that clear and focused technical support with an adequate “timeframe is offered to the Small Island Development States (SIDS) who are already grappling with various other reforms against tight resource constraints despite the political will already in place which should be welcomed.

Ambassador John Licht represents the Pacific on the ACP’s Adhoc Working Group on Tax Matters on behalf of the Pacific.

Furthermore, Vanuatu is now on the Bureau of the ACP – comprised of six member states – and in that capacity, Minister Regenvanu was involved in the selection of the next Secretary General of the ACP (on behalf of the Pacific states).

In a closed meeting on Friday the 6th and Saturday the 7th of December, the Bureau selected Mr Georges Rebelo Pinto Chikoti, former Foreign Minister of Angola, as the ACP’s next Secretary General, from March 2020 for five years until 2025.