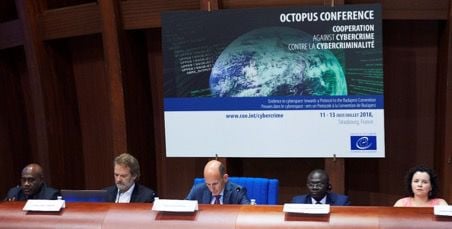 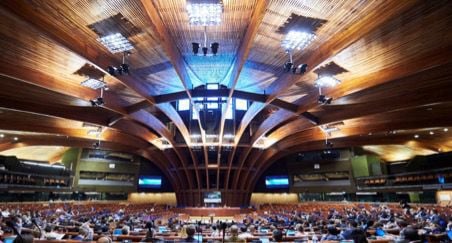 Vanuatu was invited by the European Council to attend the high-level Octopus Conference on Cybercrime with this year’s theme titled ‘Cooperation Against Cybercrime’ convened from July 11 to 13 at the prestigious Palais De Europe in Strasbourg, France.

Vanuatu’s delegation was led by the Minister of Justice, Ronald Warsal, accompanied by the Acting Director General of Justice, Mr. Pacco Siri.

The Octopus conference was attended by other State Ministers, professionals and academia specializing in Cybercrime.

The trip is timely as Vanuatu is now working on its Cyber Crime Bill and the Office of the Prime Minister and the Ministry of Justice and Community Services are working together in drafting of the bill which should go before Parliament in November this year.

Currently Vanuatu has a draft Cyber Crime Bill in 2008 and the Government is working together with support from the Australian Government and the Council of Europe to have a law in place this year.

Currently, Tonga is the only country in the Pacific region that has acceded into the Budapest Convention while Samoa and Vanuatu are also interested in having legal frameworks in place via legislation to prosecute criminals utilising their cyber space for criminal purposes.

The Council of Europe is the continent’s leading human rights organization.

It comprises 47 member states, 28 of which are members of the European Union.

All Council of Europe member states have signed and acceded to the European Convention on Human Rights known as the Budapest Convention, a treaty designed to protect human rights, democracy and the rule of law.

The European Court of Human Rights oversees the implementation of the Convention in the member states.

Mr Ronald Warsal, Vanuatu’s Minister of Justice and Community Services was also a keynote speaker at the opening of the conference.

After his speech, he showcased a Vanuatu promotional tourism clip to advertise Vanuatu to all the other Council of Europe members and it was very well received and a highlight. Thanks to Tourism office.

Vanuatu’s participation at the conference has convinced the Council of Europe to send their expert both technical and legal to Vanuatu to assist with the drafting and finalization of Vanuatu’s Cybercrime Bill in August 2018.