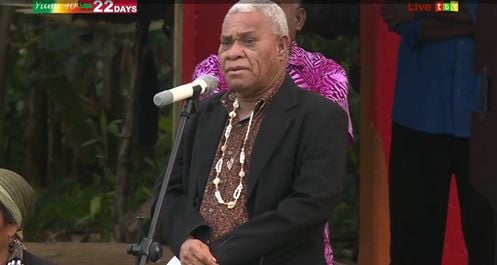 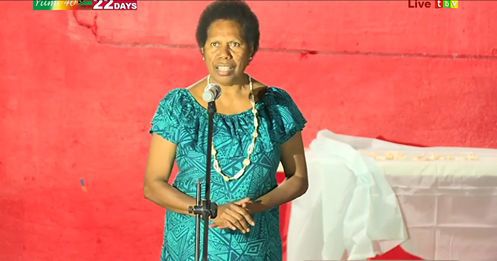 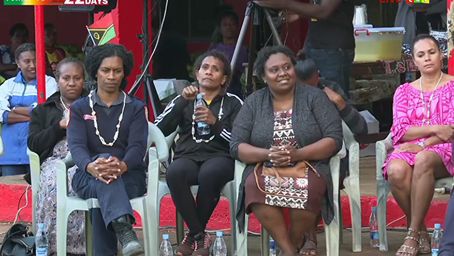 Some of the women featured in the film. 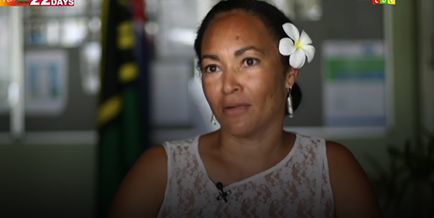 Some of the women featured in the film.

The initiative was organized by the Ministry of Justice and Community Services (MOJCS), in partnership with P&O Cruises and DFAT Australia's Balance of Power programme.

The Director General of MOJCS, Ms Dorosday Kenneth, welcomed all government officials, private sector, invited guests and the community for coming to the official launching of the “Strong Women Vanuatu” film.

She said that recently the country has been hit by COVID-19 and TC Harold and the people are present to see some of the resilience shown by some of Vanuatu's strong women within their different walks of life.

“Especially the hard works of women in uniting families and the community nowadays in showing the resilience, Vanuatu is proud of today. On behalf of the MOJCS, in partnership with the P&O Cruises, Balance of Power, a programme initiated by DFAT Australia, youths and mamas, I would like to take this opportunity to welcome you all to the launching of this short film, which features 10 of the strong women in Vanuatu,” the DG said.

PM Loughman and the Leader of Opposition, Ralph Regenvanu were also present at the premier of the film.

Loughman acknowledged the presence of all government officials, public servants, community members, chiefs and the public for attending this special occasion.

“Women have and continue to play an important and prominent role in the making and shaping of Vanuatu,” he said.

“Women are the backbone of our families and our nation. As we draw closer to our commemoration of the country’s 40th Independence anniversary, this video showcases just how much of the roles, these women among others who have played important roles as well into the nation’s building.

"This evening we are here to celebrate the achievements of this amazing women.

“As we face the challenges of 2020, rebuilding after TC Harold, the trend of COVID-19, and the impact of tourism through the closure of our borders, I am reminded daily on the strengths of our women and how much we ask for it.

"Across the sphere, from health to economy, security to social protection, the impacts of the current COVID-19 pandemic are made worse for women and girls towards the future.

"Knowing this, it is given more importance to the residents and achievements of women, particularly those, whose stories we are about to see.

"Each of these 10 women have faced unique challenges. This short film is a representation of the spirit and strength of not just these ni-Vanuatu women, but for all who have achieved extraordinary things across the different sectors of life especially in art, health, sport, education, business and tourism.

“As the PM, I am reminded daily of the resilience of our people. Vanuatu, particularly on Efate and Santo, Tanna and the islands.

"Vanuatu, like the rest of the world, is facing a downfall in relation to its economy and had seen most of the families, whose likelihoods will be affected, are those whose mothers and fathers depended on the tourism sector, and yet I believe in the resilience of this sector.

"These 10 women, are an example of women’s strength and the people of Vanuatu. I am pleased to attend this special occasion, in launching this joint partnership event between the MOJCS and P&O Cruises with the support of DFAT’s Balance of Power programme.

“As the Head of the current government, I am proud of Vanuatu’s recognition of the role of women, in serving the growth and development of this country.

"This year, we have three female Directors General.  We also have 8 different directors within the government departments. That means, 6% of the senior public servant are women. This is a big achievement.

"As Vanuatu matures in its development aspiration, together with the national framework established within the second national agenda equality policy, 2020-23, which will be later launched on the 23rd July, it is with my belief and commitment that Vanuatu will move towards a balanced representation between men and women, and voices in all levels of government, including Parliament.

"P&O Cruises have a history in Vanuatu. It is the only Cruise that hires Ni-Vanuatu men and women. I would like to take this opportunity to thank the P&O Cruises and the support they have given to their family, particularly today, through the gift of this video to celebrate the strength and contribution of women in Vanuatu, in building this nation.

“This short film should inspire our young women and girls, to see what is possible, and even when the possibility may not seem possible in this time.

"As we look around, we can see some familiar faces, amongst the women here. Each of these women have their own story.

"They all changed and are all driven to achieve their goals. We hope that one day, we see these goals delivered by women, in Parliament, and representing the voices of women in further building this nation. As we celebrate our 40th Independence anniversary, their contributions will continue to shape our future. I would also like to congratulate these ten women on their achievements as well,” PM Loughman said.

The public enjoyed the premier of the 'Strong Women Vanuatu' film which saw crowds, particularly girls and women cheering on the women’s achievements on film.