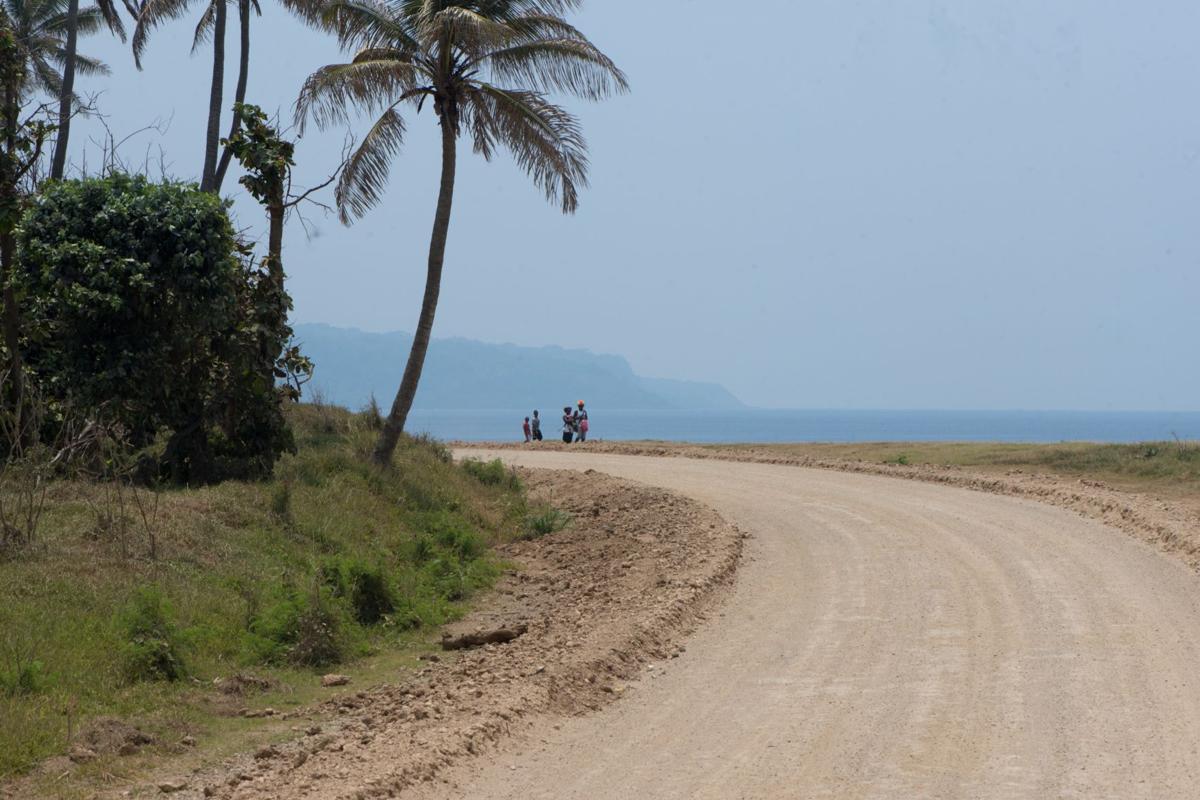 This section of the south Tanna road has been leveled and made ready to receive its first layer of aggregate. 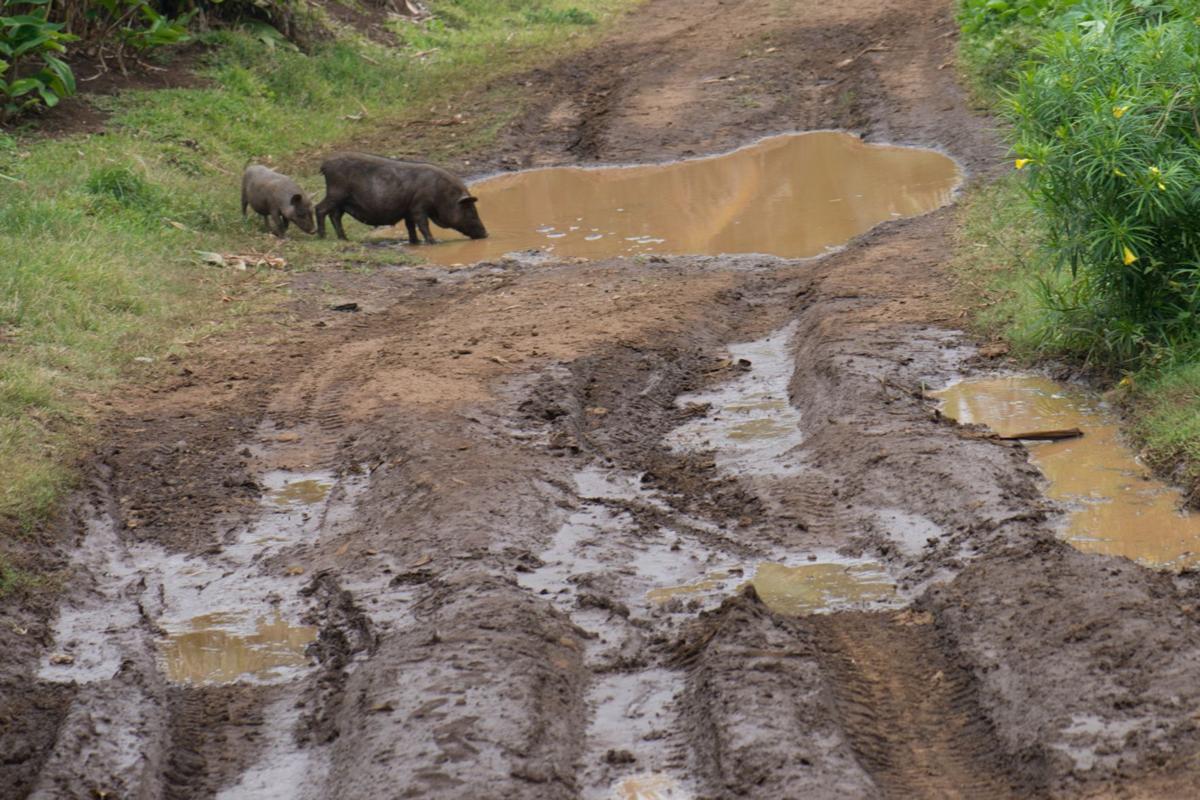 Travelers may not like the south Tanna road conditions, but at least some residents do. 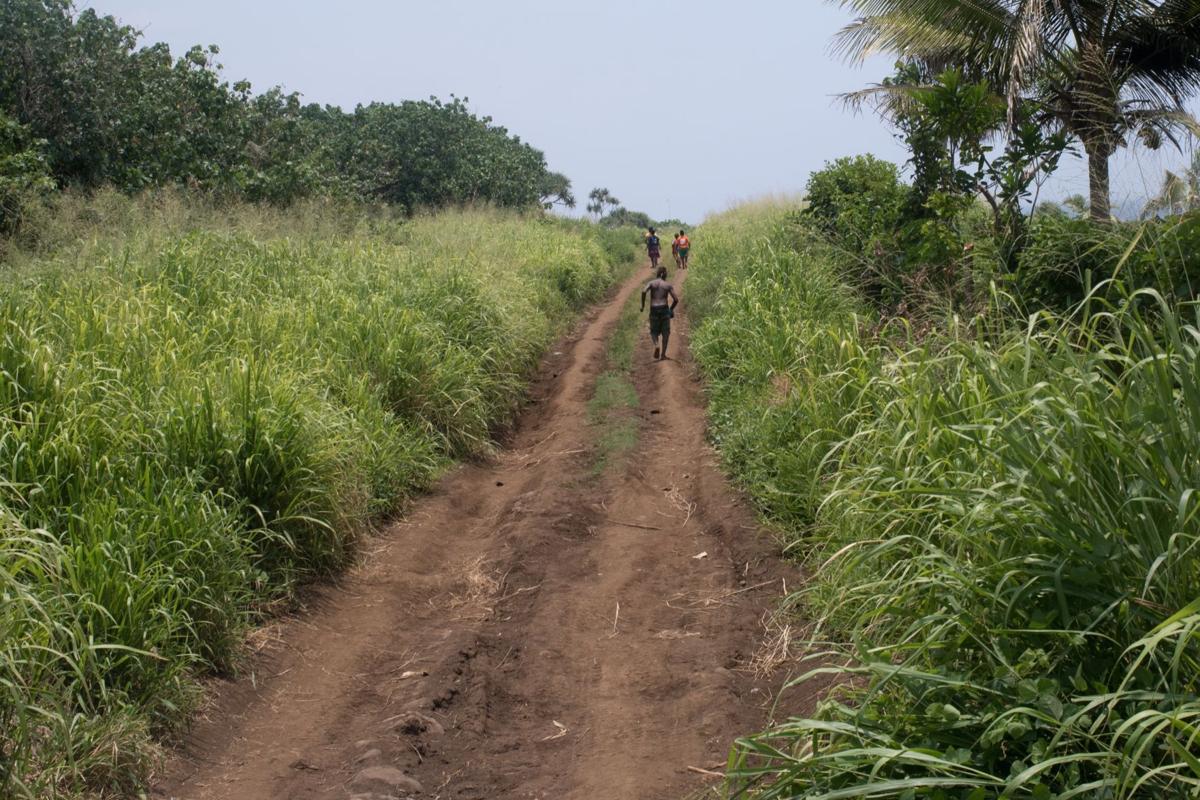 The southernmost section of the south Tanna road system is still a muddy, bumpy track. More funds will have to be found to extend the roadway all the way to Port Resolution at the southern tip of the island. 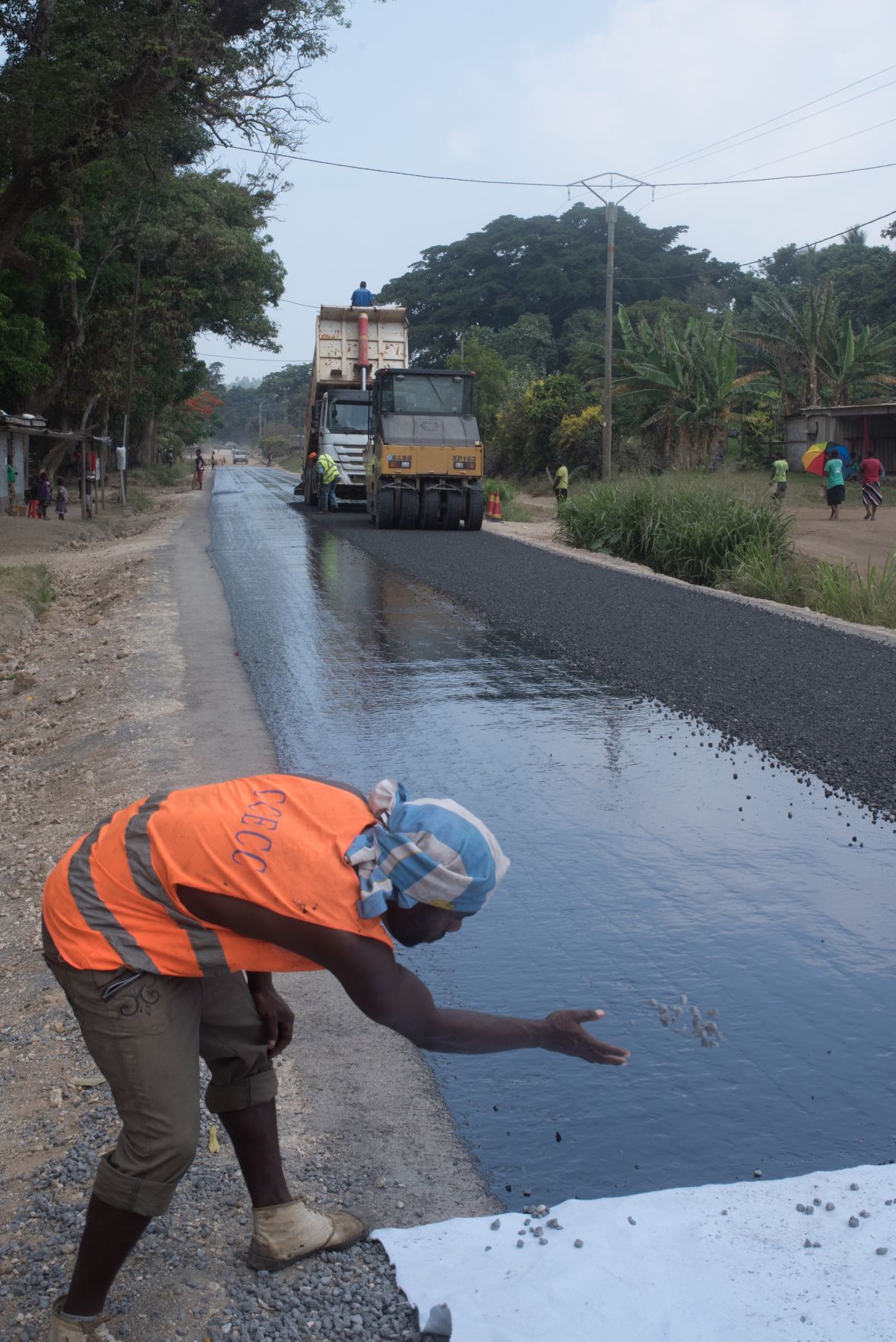 Nearly complete — a worker applies some finer touches as a road surface crew apply the third layer out of four to a road in Lenakel, Tanna. 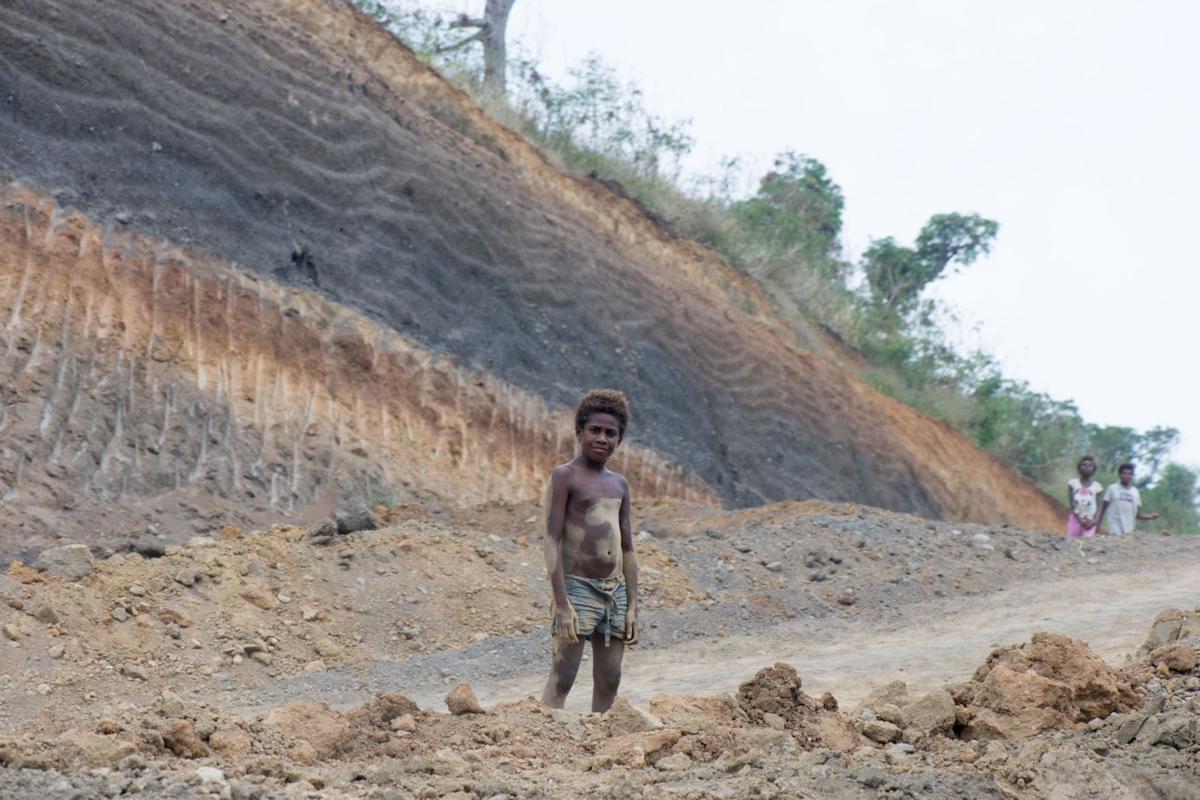 Children play on an under-construction section of the south Tanna road.

Travelers may not like the south Tanna road conditions, but at least some residents do.

Children play on an under-construction section of the south Tanna road.

On Radio Australia’s Pacific Beat programme, the government front-bencher accused China of funding the construction of ‘useless buildings’ and ‘roads that go nowhere’.

She’s hardly the first to do so. People have questioned the terms of a raft of loans taken out beginning in 2011, when lobbyists acting for the Asian Development Bank succeeded in changing finance legislation, making it possible for ministers to sign off on loans without Parliamentary oversight. 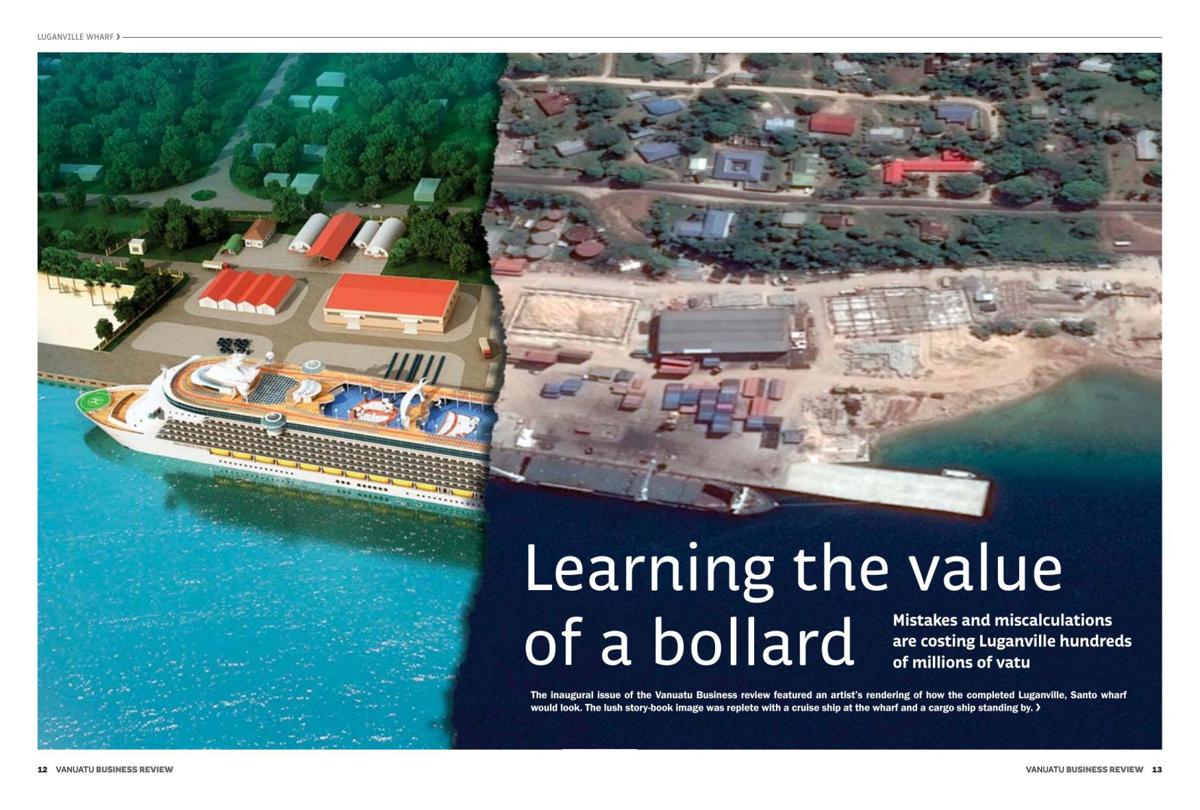 We are right to question the design, implementation and price of some of these projects. The Santo wharf project is a striking example, where failure to consult and coordinate with local and industry stakeholders resulted in a drastic reduction in cruise ship arrivals for 2018. The end result has thrown Luganville’s tourism development plans into cocked hat, and caused millions of dollars of lost revenues.

It will take years to bring cruise ship arrivals back to 2014 levels, let alone to start tapping the northern port’s full potential.

One of the greatest criticisms lined up against China’s infrastructure projects is the China EXIM Bank’s no-so-concessionary loans. The terms are substantially less favourable than those offered by the World Bank or ADB, for example. These issues have been raised with China. In a Beijing meeting with senior Foreign Ministry officials, the Daily Post was assured that “China will not force Vanuatu to pay its debts.”

But a population whose New Year’s Day hangover was sharpened by a 2.5% rise in the VAT is not so optimistic. The nation spent all of 2017 wrangling with the question of how to service our increasing debt load. The issue threatened to split the cabinet and was the subject of heated debate throughout the country.

We have a right and a duty to question our Chinese-funded infrastructure investments. But Australia should think twice before chiming in.

These roads are not ‘roads to nowhere’. They lead to our homes.

This is a surprisingly tone-deaf flight of rhetoric. Ms Fierravanti-Wells has travelled our rural roads numerous times, and has always warmly engaged with the people who live on them.

Last week, I circled the entire southern half of Tanna. Half of the drive was on a Chinese-funded road. The other half was on rutted, dangerous tracks, some of them fit only for goats. South Tanna is a stunningly beautiful and—until recently—largely inaccessible place.

Rough seas along the weather coast make travel over water difficult. The terrain, a seemingly endless succession of steep hills and rills running into the sea, is difficult to traverse.

Some transport vehicles servicing this end of the island have metal cages over the back, so that people don’t get thrown out of the truck as it lurches back and forth.

When we returned from our circuit of the southern half of the island, I had bruises on my arms, hips and ribs from being tossed about. Twice I had to help the driver line the wheels up while crossing ‘bridges’ that consisted of bare logs laid over a creek. At one point, our truck literally teetered in the air with only three wheels touching the road as we navigated a nasty bit of hillside.

Enter the China Civil Engineering and Construction Company. Many people have levelled criticisms at them, but on the Tanna road project at least, their engineering should not be questioned.

The new road to south Tanna features dozens of large-scale cuts across countless hills. It includes switchbacks and concrete bridges. The road is broad, has been properly canted to make driving easier, and features extensive concrete drainage systems. The $50+ million project extends from White Grass airport about two thirds of the way down the island.

The project has faced difficulties. Land issues and concerns over respect for kastom have caused rancour. But in July 2015, chiefs and ranking members of Tanna society performed a reconciliation ceremony under a painted banner saying ‘Tanna road project must go on’.

Now, people are universally supportive. The road project has unlocked the economic potential of about 25% of the island, a part that until now was largely isolated. South Tannese trying to improve their lot inevitably drifted to Lenakel and Port Vila seeking opportunity.

China’s record with infrastructure projects is spotty, to be sure. And we are right to criticise. But Ms Fierravanti-Wells should do more homework before diving into the debate.

Road Risks on the Rise

Arthur Simrai doesn’t seem to know the meaning of the word obstacle.

This shambolic operation, which should have been completed by now, is still lurching along with no end in sight. Traffic in the capital is a shocking mess. Questions are piling up about its budget. The design and planning phase was a comedy of errors, according to whistleblowers directly involved in the project. This newspaper has raised a number of concerns about road safety on several occasions. Some were addressed quickly, but many were simply ignored.

This isn’t the first Australian infrastructure project run into the proverbial ditch, either. About half a decade ago, government officials were so incensed with one project manager arbitrarily re-writing the project spec that he came within a hair of receiving what’s known locally as a Green Letter—in effect a notice to leave the country forthwith.

The government of Australia might want to put down those stones it’s throwing at China and learn a thing or two from its own mistakes first. And talking over our heads about our shortcomings isn’t going to win them many friends here, either.

Infrastructure is integral to Vanuatu’s development, and as a member of the Lenakel municipal council said last week, “It all begins with roads.” If Australia is serious about helping, it should do more, do it better, and gripe less.