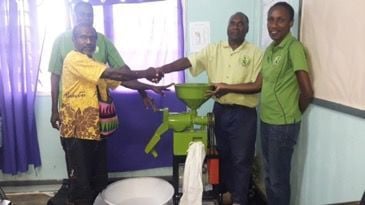 Handing over of rice milling machine to PAO SANMA 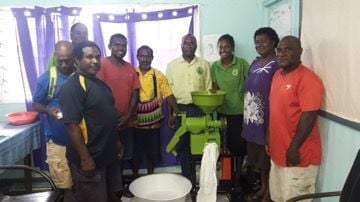 Handing over of rice milling machine to PAO SANMA

Santo DARD had purchased six rice-milling machines for all the six provinces of Vanuatu and SANMA province was the first province to receive its machine.

DARD Rice Research and Development Officer, Ms Neirove stated, “This is a dream come through for Santo rice farmers as most farmers have high interest in growing rice and this rice milling machine will motivate them to increase their production.

“Many farmers on Santo have been growing rice a few years back but due to lack of rice-milling machine, many farmers have lost interest in the crop which result in low rice production at the moment.

“Rice farmers on Santo are now fortunate to have access to mill their rice once they harvested.”

Rice industry in Vanuatu has a bright future given that the constant demand is there and also that there is potential to develop the crop through interested Vanuatu rice farmers.

Rice is an annual plant that belongs to the cereal family. There are five varieties of rice in Vanuatu namely, Local Tanna rice, Local Santo rice, Nari 1 rice, Nari 15 rice and Hybrid rice. These varieties can be grown on dry land and not in swampy area.

Ms Neirove added that in 2018 she worked with only one rice farmer to carry out a research on one variety of rice, which is Local Santo.

“The result has indicated that Local Santo can grow well on Santo and other islands as well,” she said.

“In 2019 rice seeds were ordered from Tanna of the local varieties Local Tanna and Nari 15. It was found that Nari 15 grows well on Santo so we increase the production of Nari 15.

“Nari 15 rice seeds were distributed to rice farmers on Santo and one farmer each from Malekula, Maewo, Banks, Epi and Efate.

“The seeds were distributed purposely for these farmers to grow and observe whether the Nar15 variety can grow well on their island as well.

“The results have shown that Nari 15 can grow well in these islands too.”

The DARD Rice Research and Development Officer added this year there are six rice farmers on Santo, mainly from South Santo, Beleru and Monique’s hill.

“Rice farmers from Beleru and Monique’s hill have harvested their rice and seeds will be provided to farmers in South Santo.

“More farmers in South Santo are keen to grow rice and our priority now is to grow rice to collect seeds before increasing production, as a means of promoting rice production in Vanuatu.

“We are hoping that gradually more farmers around the country will invest in rice production and each province should have access to one rice milling machine, to support rice production. However, training is required to assist with the smooth operation of the rice-milling machine.

“Trainings will be organized on rice production, management of rice farm, harvesting, processing and packaging.”

Neirove who is DARD’s Rice Research and Development Officer concluded that the long term vison of DARD is to see that more farmers around Vanuatu grow their own rice organically rather than relying on imported rice.

Female Rice farmer, Lolita Meltetake, has grown a small plot of rice at Monique’s hill after purchasing a kilo of rice during the first National Agriculture Festival in 2018.

“My family and I consume a lot of rice but I do not know what a rice plant looks like.

“So after sowing the rice seeds only four of them grew well and the seeds were collected for replanting,” she said.

As a health worker in Luganville, farmer Meltetake says that growing her own rice is better than eating imported rice.

“With the assistance from DARD’s Rice Officer, I received some rice seeds and technical advice on how to plant rice and just before cyclone Harold I planted a small plot (80m x 20m) of rice and now the rice is ready to be harvested this week.”

Rice farmer, Meltetake, was amongst the other rice farmers that witnessed the handing over of the rice-milling machine.

“This rice-milling machine definitely motivates me to increase my rice production now that I know I will produce an end product that is locally produced which is Vanuatu rice.

“In the future Santo rice farmers will establish an association provided more farmers are involved in rice farming.

“Santo rice farmers are very happy to finally have a rice-milling machine.

“Maybe in the future when we have many rice farmers and the quantity of rice produced is sufficient, we could trade between our islands to ensure we eat local rice and at the same time encourage more farmers to grow rice in Vanuatu.

“It is much better to eat what we grow locally because we know it is organic,” Rice farmer Meltetake concluded.