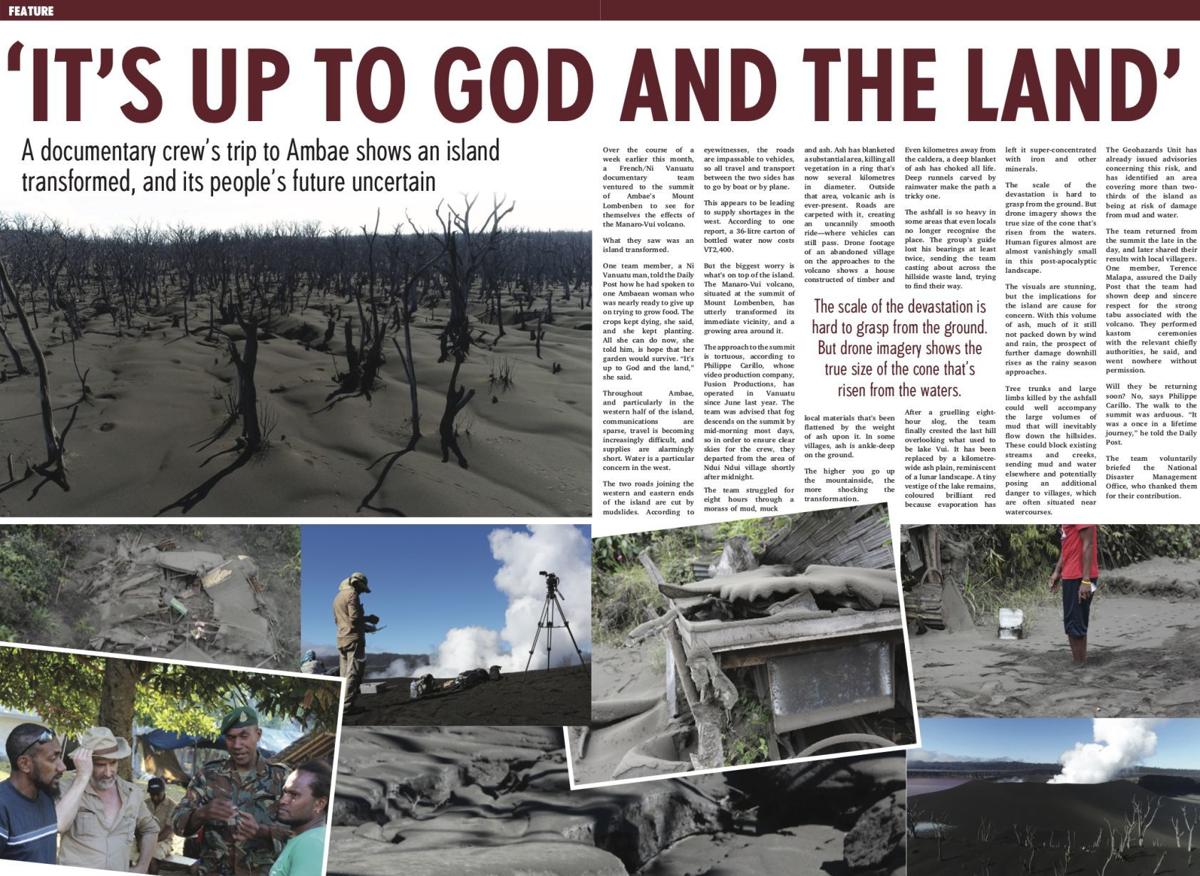 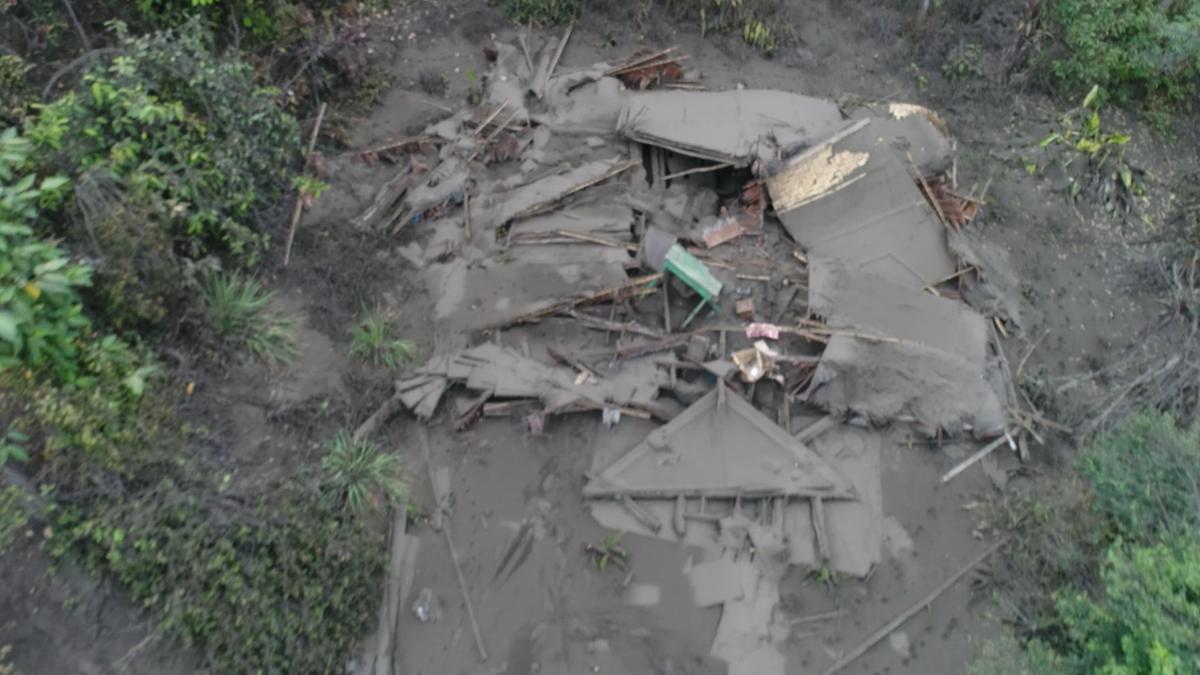 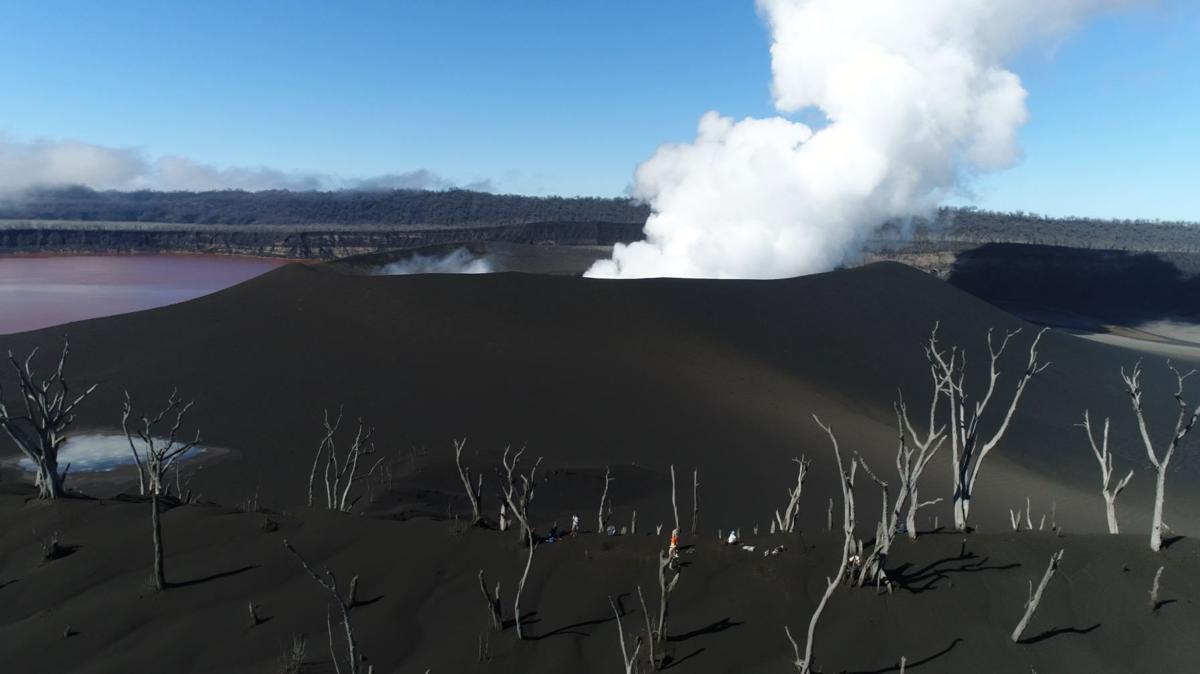 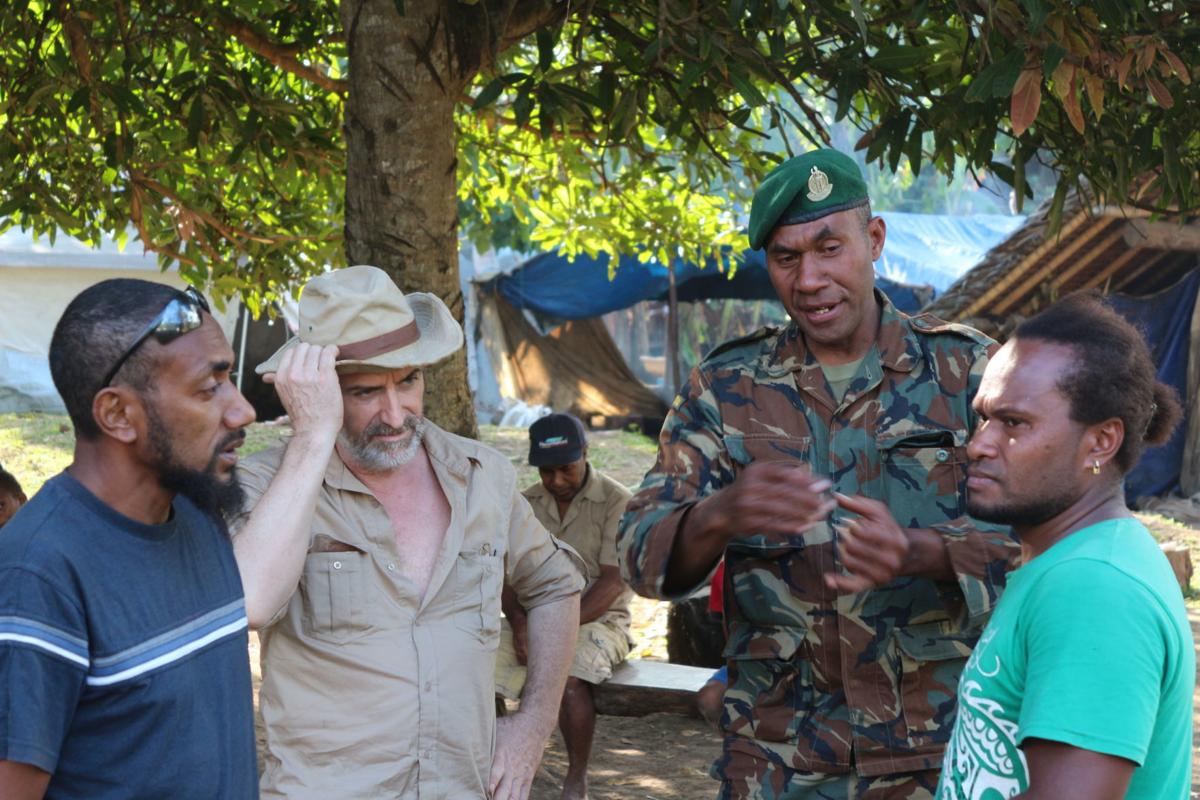 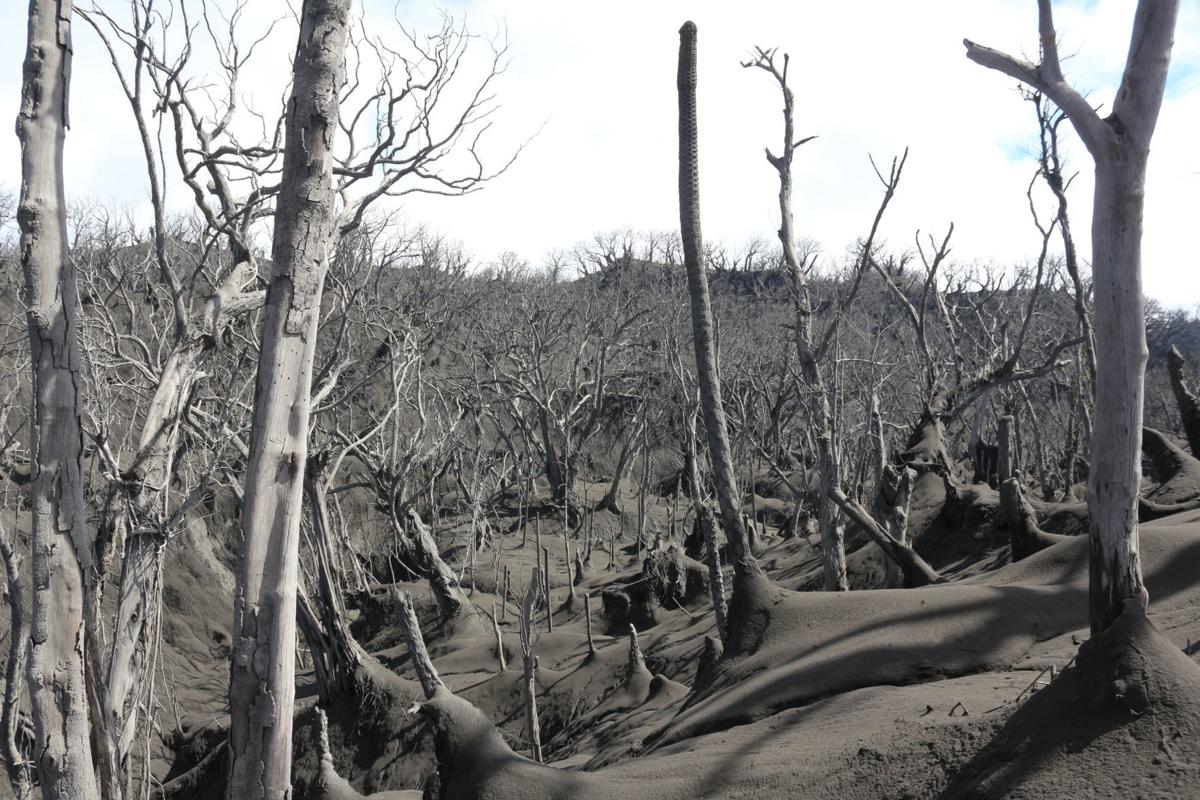 Over the course of a week earlier this month, a French/Ni Vanuatu documentary team ventured to the summit of Ambae’s Mount Lombenben to see for themselves the effects of the Manaro-Vui volcano.

What they saw was an island transformed.

One team member, a Ni Vanuatu man, told the Daily Post how he had spoken to one Ambaean woman who was nearly ready to give up on trying to grow food. The crops kept dying, she said, and she kept planting. All she can do now, she told him, is hope that her garden would survive. “It’s up to God and the land,” she said.

Throughout Ambae, and particularly in the western half of the island, communications are sparse, travel is becoming increasingly difficult, and supplies are alarmingly short. Water is a particular concern in the west.

The two roads joining the western and eastern ends of the island are cut by mudslides. According to eyewitnesses, the roads are impassable to vehicles, so all travel and transport between the two sides has to go by boat or by plane.

This appears to be leading to supply shortages in the west. According to one report, a 36-litre carton of bottled water now costs VT2,400.

But the biggest worry is what’s on top of the island. The Manaro-Vui volcano, situated at the summit of Mount Lombenben, has utterly transformed its immediate vicinity, and a growing area around it.

The approach to the summit is tortuous, according to Philippe Carillo, whose video production company, Fusion Productions, has operated in Vanuatu since June last year. The team was advised that fog descends on the summit by mid-morning most days, so in order to ensure clear skies for the crew, they departed from the area of Ndui Ndui village shortly after midnight.

The team struggled for eight hours through a morass of mud, muck and ash. Ash has blanketed a substantial area, killing all vegetation in a ring that’s now several kilometres in diameter. Outside that area, volcanic ash is ever-present. Roads are carpeted with it, creating an uncannily smooth ride—where vehicles can still pass. Drone footage of an abandoned village on the approaches to the volcano shows a house constructed of timber and local materials that’s been flattened by the weight of ash upon it. In some villages, ash is ankle-deep on the ground.

The higher you go up the mountainside, the more shocking the transformation. Even kilometres away from the caldera, a deep blanket of ash has choked all life. Deep runnels carved by rainwater make the path a tricky one.

The ashfall is so heavy in some areas that even locals no longer recognise the place. The group’s guide lost his bearings at least twice, sending the team casting about across the hillside waste land, trying to find their way.

After a gruelling eight-hour slog, the team finally crested the last hill overlooking what used to be lake Vui. It has been replaced by a kilometre-wide ash plain, reminiscent of a lunar landscape. A tiny vestige of the lake remains, coloured brilliant red because evaporation has left it super-concentrated with iron and other minerals.

The scale of the devastation is hard to grasp from the ground. But drone imagery shows the true size of the cone that’s risen from the waters. Human figures almost are almost vanishingly small in this post-apocalyptic landscape.

The visuals are stunning, but the implications for the island are cause for concern. With this volume of ash, much of it still not packed down by wind and rain, the prospect of further damage downhill rises as the rainy season approaches.

Tree trunks and large limbs killed by the ashfall could well accompany the large volumes of mud that will inevitably flow down the hillsides. These could block existing streams and creeks, sending mud and water elsewhere and potentially posing an additional danger to villages, which are often situated near watercourses.

The Geohazards Unit has already issued advisories concerning this risk, and has identified an area covering more than two-thirds of the island as being at risk of damage from mud and water.

The team returned from the summit the late in the day, and later shared their results with local villagers. One member, Terence Malapa, assured the Daily Post that the team had shown deep and sincere respect for the strong tabu associated with the volcano. They performed kastom ceremonies with the relevant chiefly authorities, he said, and went nowhere without permission.

Will they be returning soon? No, says Philippe Carillo. The walk to the summit was arduous. “It was a once in a lifetime journey,” he told the Daily Post.

The team voluntarily briefed the National Disaster Management Office, who thanked them for their contribution.

It's up to God and the land

A troubling look at conditions on the island of Ambae.