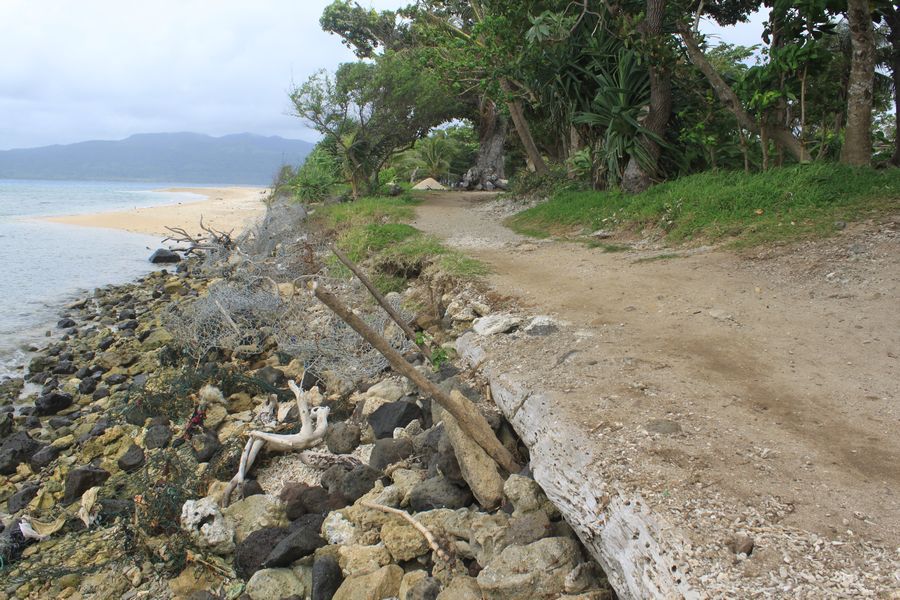 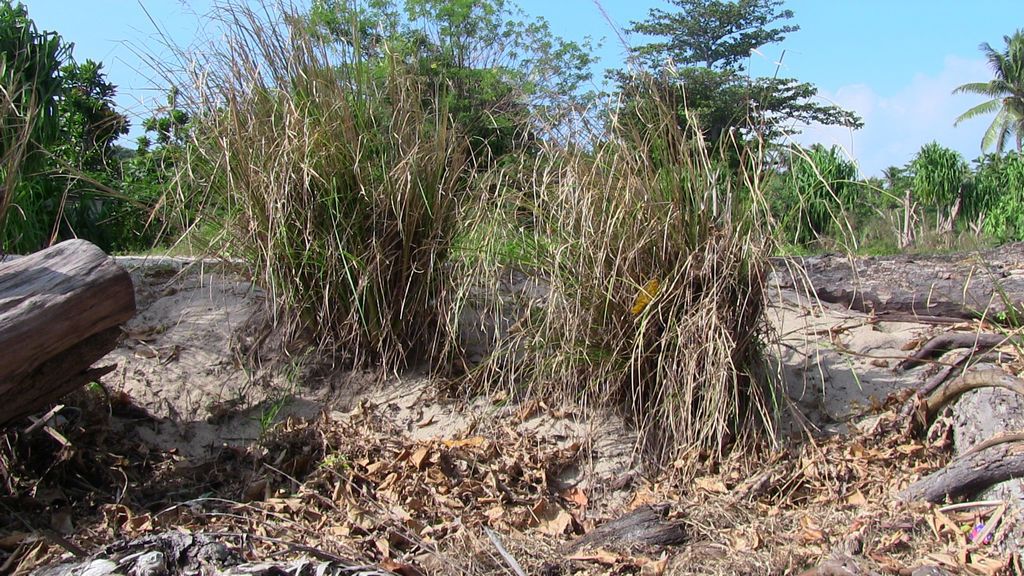 Vetiver grass at Piliura on Pele island is not having any impact.

Vetiver grass at Piliura on Pele island is not having any impact.

Pele and Nguna islands are off-shore islands of Efate, Shefa Province, with the distance between their closest points about 100 metres.

These two islands have very beautiful beaches and scenery, idealistic tourist destinations but the threat of climate change is a real concern.

In 2009, GIZ (German development agency) assisted the community of Pele island, through the assistance of the Pacific Community (SPC) and South Pacific Regional Environmental Programme (SPREP) an attempt to cope with the adverse effects of climate change.

“Coping with Climate Change in the Pacific Island Region” programme components 2, 3 and 6 and expanded to cover components 4 and 5 in 2012.

The overall objective of the programme is that ‘the capacities of regional organisations in the Pacific Islands region and its member states to adapt to climate change and mitigate its causes are strengthened’.

This objective will be achieved through six components highlighted below.

Components 2 and 3 focus on climate change-related aspects in the field of land- and marine-based resources.

The programme will be guided by nationally determined priorities and will seek to build on and complement existing and proposed initiatives by the national government, SPC and SPREP and development partners involved in providing climate change related assistance to countries.

The effort and assistance is much appreciated and these assisted the people to focus and learn more about climate change and being engaged in some activities to assist in the people coping with impact of climate change.

Unfortunately small beautiful islands such as Pele and Nguna, are on the receiving end, when the big industrialized countries contribute more to the changes in climate today.

Small islands cannot do much, when it comes to sea level rise, because they cannot stop this, when it happens, so moving and adapting with necessary skills and knowledge, is important for resilience and survival.

In a recent meeting, the Pacific leaders had strongly urged the G20 group of major economies gathered in Germany last week to reaffirm their commitment to the full implementation of the Paris Agreement.

The Pacific leaders recognised that in our small and vulnerable islands, climate change is happening at a faster rate than was appreciated at the time of the Paris Agreement.

It is imperative for the world to focus on the more ambitious target in the Paris Agreement of limiting warming to 1.5C.

At Unakap village, in early 2000, a private local company had assisted the village in building a sea wall using just wire and stones, after a short while, the wall was damaged by strong waves – a second wall was again built, a few years back by the Department of Geo-Hazard, that was again demolished. Today with the sea level rise, the sea has almost reached the main road that links Taloa mission and Unakap village – only 20 centimetres from where the waves stop, specially during cyclones.

“In 5 years time, there will be no more road there, and the local community needs to build another road in the higher ground,” Chief Tagalele said.

“We do not see any difference, from the past and present, with pandanus trees that we have planted.

“We have measured the distance between a ‘custom stone’ called ‘Farea Stone’ or ‘nakamal stone, and the shore, and the distance remains the same – despite claims that there are impacts of sea level rise along the beach,” Chief Tagalele said. The distance had been measured many times but there is no difference.

“Although there was no study or research to confirm that, but we believe there are some kind of layers, under the sea, that we believe prevent our ‘little village of Unakap to sink.”

“The only difference we often noticed, is the mass of white sand.

“At the beginning of the year, we will see mass of white sand at the western side of our sea front, whereas in September/October during that period of the year, all the white sand shifted back to their original site.

“White sand here, are shifted sand, of which western winds caused waves or currents that shifted them from other beaches in other villages in the island, and ‘stored’ them temporarily at the point – The shifted sand will be there for sometimes in the early year, and towards the end of the year, between September and October, the eastern winds create waves and currents that will shift them back to their original place.”

Dr. Christopher Bartlett of GIZ under the Vanuatu Meteorology and Geo-Hazard Department (VMGD), explained “ Sediment transport along beaches is mainly caused by waves and their derived currents which can lift particles of sand and transport these particles to another location. Waves usually do not break on a beach at right angles to the beach. When waves approach at an angle, any particle of sand picked up by the wave will be moved along the beach.”

He added “During extreme climate events and storms or over extended periods of “unusual” wave conditions (for example during climate change-influenced El Nino periods), the sand supply may become temporarily depleted. The extent to which this happens will depend on the beach length, the wave direction, the severity of the storm or the extent of the period of “unusual” wave conditions.”

According to Dr. Christopher,”Storm waves can also cause erosion by moving sand offshore. If the sand that is moved off-shore remains in relatively shallow water, subsequent moderate weather and gentle swells will move this sand back onto the beach.”

He concluded “In summary, most natural beach systems, particularly in the tropics, are in a state of flux. Climate change adds additional fluctuations to the system, making beaches more unstable than they normally are.

The traditional knowledge shown here is incredible, your interviewees are indicating that seasonal changes in wind, current and wave direction are able to reshape the beach!”

At Piliura village (Pele island) with a population of more than 300 people, the cultivation of vetiver grass imported from Aneityum island (south of Vanuatu), that was planted along the coast, did not have any impact.

They were planted from one end of the village to the other end, but unfortunately all had been washed away by sea.