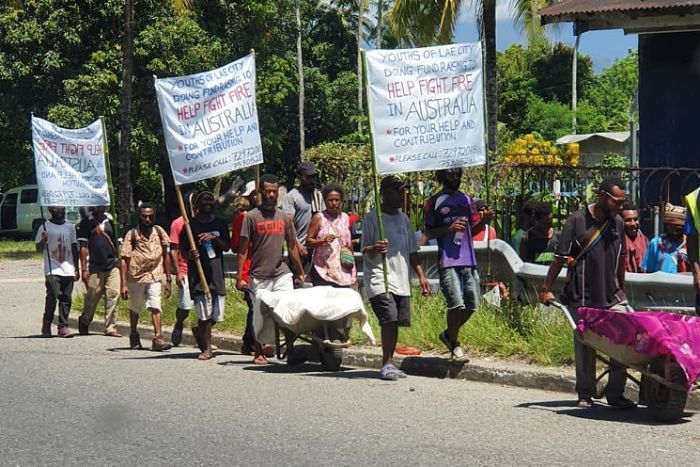 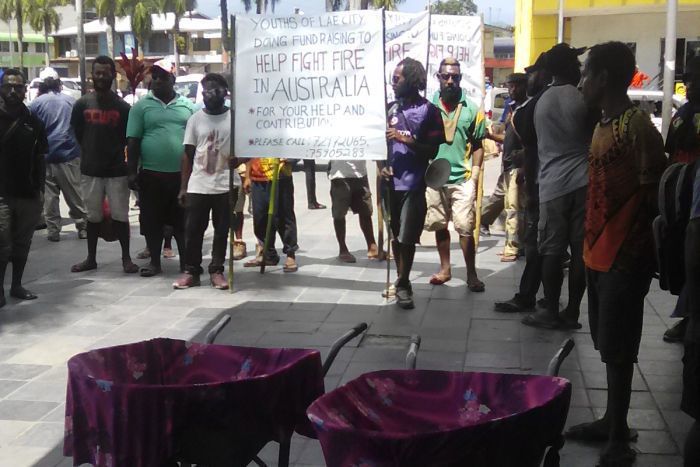 The Youth of Lae were holding a rally to raise money for Australia's bushfire victims when they attracted the attention of PNG police. Supplied: Giro Imbu/ABC 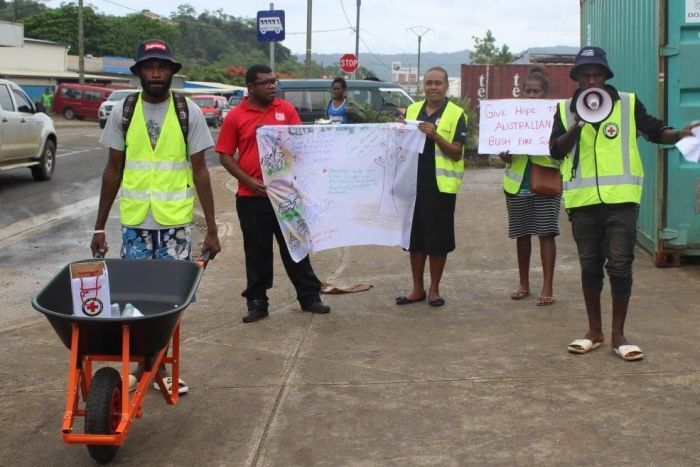 In Vanuatu, the Red Cross was spreading the message that Australian helped after Cyclone Pam, and now it is time to give back. (Supplied: Facebook/ABC) 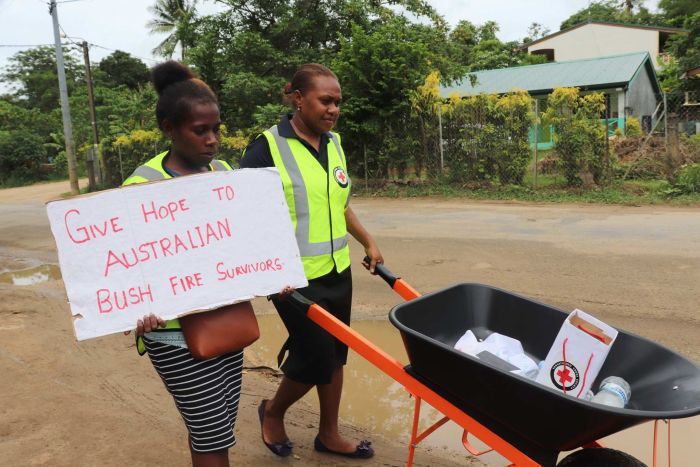 The Youth of Lae were holding a rally to raise money for Australia's bushfire victims when they attracted the attention of PNG police. Supplied: Giro Imbu/ABC

In Vanuatu, the Red Cross was spreading the message that Australian helped after Cyclone Pam, and now it is time to give back. (Supplied: Facebook/ABC)

Wheelbarrows are being pushed down the streets of Australia’s Pacific neighbours collecting donations to support the victims of this summer’s bushfire crisis.

Last week, the governments of Papua New Guinea (PNG) and Vanuatu both committed resources to bushfire relief including financial assistance and firefighting personnel, but everyday citizens have also felt compelled to act.

In Lae, PNG’s second biggest city, a grassroots youth movement began a wheelbarrow push to collect donations and to spread a message of support.

“It’s what we do, we normally push wheelbarrows to do appeals to the public,” Giro Imbu from the Youth of Lae said.

“It’s one way of telling people in times of disaster that we are with them.

“We were showing something from our heart.”

The group had raised 1,000 kina ($430) when their act of goodwill temporarily landed them in hot water.

Ms Imbu and her team were arrested by PNG police. Their wheelbarrows and collected proceeds were also seized.

“We were brought in for questioning and they said we were not following the proper procedures,” Ms Imbu said.

“We said sorry, but we wanted our voice to be heard, that’s why we did this.”

The misunderstanding has since been resolved and authorities have put the youth group in touch with the Australian Consulate in PNG.

Lae resident and Australian expat Helen Taylor said she was overwhelmed by the grassroots generosity when she came across the group on her drive through the city, that can be fraught with danger.

“I must admit, my first thought was ‘what are these guys up to?’ but when I got closer I could see they were holding up big signs that were all about donating money for the fires in Australia,” Mrs Taylor said.

“It blew me away, I haven’t seen anything like that here before [even for] their own natural disaster last year with the earthquake.

“The minimum wage in PNG is 3.5-kina an hour, which is just over $1 Australian — these guys have nothing. To be giving cash donations is massive.”

Ms Imbu said the wheelbarrow campaign was all about sending love, support and gratitude to a much-loved neighbour.

“We say Australia is our ‘Momma Country’, the country that helped us to be where we are right now.”

“Most of us benefit from Australian aid which builds health centres and hospitals, that’s why we took this initiative so that we could at least do something at the community level, that’s why we did this.”

Vanuatu also pushing the barrow for Australians in crisis

In Vanuatu, the Pacific’s seventh poorest nation, the sentiment — and method of fundraising — was similar.

Emma Mesao, who works for Vanuatu Red Cross Society, also led a wheelbarrow push and has a fundraising target of 500,000 vatus ($6,300).

“We’re trying to give a hand to them (bushfire victims) so they can build their lives again,” Ms Mesao said.

“If there’s a disaster in Vanuatu, Australia helps … we get in together to help each other so we’re here to help.”

The wheelbarrow push is one of three fundraising appeals organised by Red Cross Vanuatu in the capital Port Vila.

A benefit concert was held on Saturday while Red Cross Vanuatu is also appealing for donations via its website.