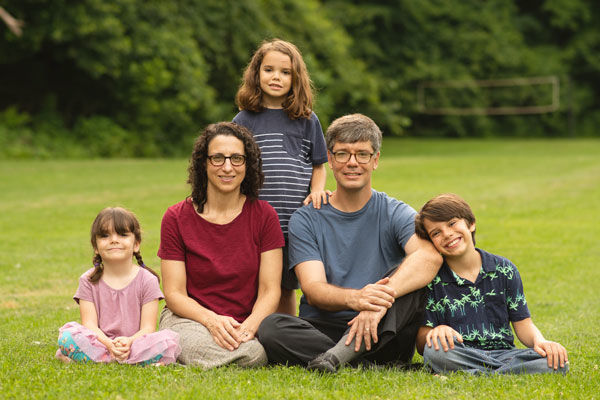 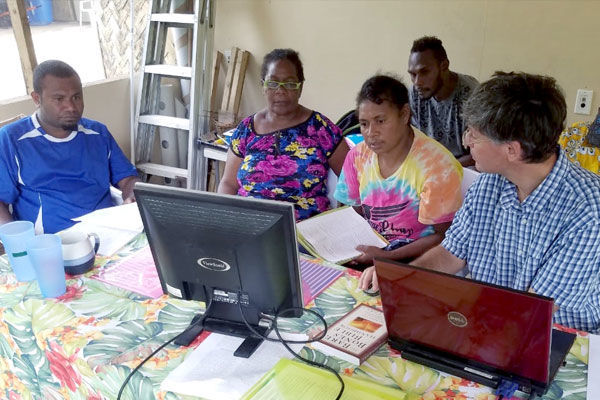 Translating Philemon with the newcomers. They are jumping into the deep end, working on Paul’s famously complex sentences and averaging one or two verses per hour. Credit: Wycliffe

Translating Philemon with the newcomers. They are jumping into the deep end, working on Paul’s famously complex sentences and averaging one or two verses per hour. Credit: Wycliffe

Every workday Michael Smith walks across his lawn to go sit in a small house with his co-translator, Derek. Together, they’re painstakingly translating Mwotlap Scripture to make sure it’s clear, accurate and natural.

“Translation is a discipleship process,” Michael explained. “[It’s] working verse by verse with someone for the whole New Testament … until they can explain it backward and forward in their own language.”

Michael was originally an engineer, but became fascinated with translation when he went to Papua New Guinea in 1999 to visit his aunt and uncle who worked with Wycliffe Bible Translators. “I knew it was something I wanted to get involved in, but I thought it would be in the long-distance future,” he laughed.

But only three years later he was back in Papua New Guinea to help Bible translators with IT issues and to substitute teach at the high school. Michael quickly realized that he wanted to be directly involved in Bible translation. When he returned to the U.S., he studied linguistics at a graduate school in Texas. While there he fell in love with both the mission’s community and his future wife, Danielle. Danielle had also served overseas in French-speaking West Africa, and was in the process of finishing her master’s degree in linguistics.

Between Michael’s previous experience in the Pacific and Danielle’s understanding of French, Vanuatu — an island nation in the Pacific — seemed like the perfect fit. So in 2009 with a 1-year-old in tow, they embarked on a new adventure together to serve the Mwotlap people. Now 10 years and two more children later, they live on the small island of Rah near the larger island of Mota Lava.

Today, out of the 110 indigenous languages on Vanuatu, nearly 60 languages are still waiting for a Bible translation.

“Even though there are many churches in Vanuatu, the Gospel is not well known here,” Michael explained. “Christian activity is reduced to ticking boxes. So as long as you show [up] for church work days and services, you are good to go. The actual teaching in church is all about obedience and very little about who God is or what he has done for us. Once we even heard a pastor say, ‘you have to be perfect to follow Jesus.’ We just don’t hear about grace in the churches here.”

But slowly, people are starting to see glimpses of God’s grace through translation. One new translator from a local church joined Michael and Derek as they worked through the book of Galatians. Michael shared, “Galatians is all about the good news of God’s grace. So, when working through it with him, he got it! He’s now excited to teach this in his church, where people just don’t know about this.”

Together, they are now tackling the book of Romans to build on the foundation of the Gospel.

Life in Vanuatu proceeds slowly, and over the last 10 years, Danielle and Michael’s lives have been interrupted by illness, daily living challenges, lack of workers, injuries, travel difficulties and more. They shared about how it was challenging to let go of the typical American values of control and efficiency.

“There’s been a process of accepting that this is not our work that we’re in charge of, but saying ‘OK God, we know you called us here. We are letting this be in your hands and not imposing our views on the work.’ … My identity as a productive person was taken away, and the only thing that [could] replace it was to be obedient to God. So it’s a very different kind of identity, when your focus is on ‘How do I be obedient in this situation?’ rather than ‘How do I be productive in this task?’” Michael said.

But Michael and Danielle keep persevering. “My joy is when I see the lights go on for someone — when they see grace for the first time, like my co-translator Derek,” Michael said.

Danielle shared a story of Derek living out the grace he discovered in the Word: “Recently, Derek’s tablet was broken by a thief. He was very angry, upset and hurt but also willing to forgive. When Derek reported the theft to the local chiefs, they were very upset. They lined up all the teenagers and began yelling at them, and things began to get very heated. But Derek intervened. He calmed everyone down and reminded them about the justice process, and that they didn’t need to be angry and vengeful, but instead deal with things in the right way.

“To see someone start to apply the most difficult thing God requires of us, to forgive our enemies,” said Michael. “That’s the sort of thing that really motivates me — to see individuals start to be changed and molded by God’s Word.”