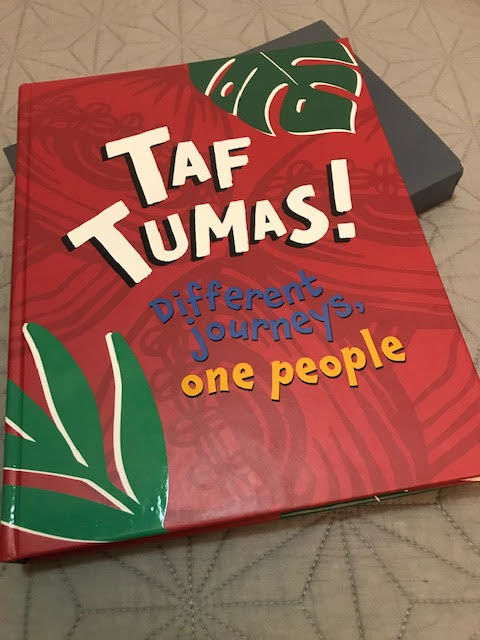 This National Children’s Day will be marked by a key milestone, launching of Vanuatu’s first ever non-fiction children’s storybook about inspiring ni-Vanuatu. The book is published by the Vanuatu Children’s Literature Community Initiative to celebrate the 40th independence anniversary.

The beautifully illustrated 180-page hardback book presents 40 diverse stories for children, parents and teachers to read together. Called ‘Taf Tumas! Different journeys, one people’, it will be launched as part of the official independence anniversary programme on Friday 24 July.

With encouragement from the Ministry of Education and Training (MoET) and support from financial sponsors, the majority of the printed books will be given free to Vanuatu’s approximately 400 primary schools. A smaller number will be sold to help pay for costs and hopefully a second edition.

“Selecting the ‘first 40’ for this first edition was a difficult process,” Ms Naupa said. “There are so many inspiring people from across Vanuatu who have achieved great things! We have strived to select a balance of stories that reflect Vanuatu’s diverse geography, cultures and languages. But also, to include stories that inspire self-empowerment, self-determination and respect for human rights and gender equality,” she said. “What all of the stories have in common is that they show that no matter what your background, age or gender, you can do something great!”

“This book celebrates the inspirational stories of a diverse range of Vanuatu’s people who have helped shape our nation. From all sorts of backgrounds and beginnings, the people within these pages have taken different journeys, but have all touched the lives of Vanuatu’s people,” Ms Naupa said.

Artwork by various artists engaged as part of the initiative will be exhibited as part of the Alliance Française’s “40 Artists” exhibition that opens in Port Vila on 20 July. The Taf tumas! artistic portraits reflect a range of techniques using paints, pencil and digital media. The exhibition runs throughout the 40th independence anniversary celebrations.

“In consultation with MoET, the stories are written for children aged nine to 13 years and published in English and French as the official languages of instruction for these age groups. We hope many other people will enjoy the book too, and that this initiative continues to grow and inspire us all to collect stories of Vanuatu’s greatness,” Ms Naupa said.

The stories have also been recorded for broadcast on radio in Vanuatu’s three official languages, Bislama, English and French, and will feature on social media.

Keep an eye and ear out for Taf tumas! on TV, in the newspaper and as story time readings on national radio building up to the launch event. Come and celebrate with the team on National Children’s Day at Independence Park where there will be a tentful of activities run by volunteers.