A destroyed building in Luganville, Vanuatu 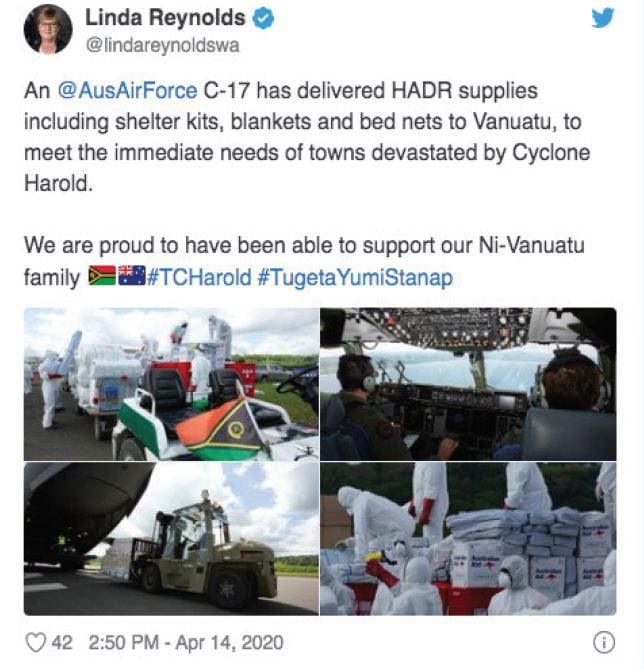 A destroyed building in Luganville, Vanuatu

Australian defence officials are looking to how a plane from China held up a Royal Australian Air Force aircraft from landing in Vanuatu while carrying vital humanitarian supplies for the cyclone-struck nation.

The RAAF plane carrying aid was due to land in Vanuatu’s capital Port Vila on Sunday, but turned around and returned to Australia when it realised a Chinese plane with medical equipment was also on the airport’s tarmac.

The plane from China carrying donated medical supplies to fight COVID-19 had landed at the airport the previous day.

was circling the airport, but the decision was made to return to Brisbane when it reached its fuel limit.

There is growing concern within Defence about whether the hold-up was intentional to delay the Australian plane from landing.

“The aircraft had been unable to safely land on 12 April 2020,” the Defence spokesman said.

“Another aircraft – an A320 charter flight from China – was running late in unloading COVID-19 supplies at Port Vila Airport preventing the RAAF C-17A from landing safely. The RAAF C-17A aircraft returned to Australia on 12 April 2020, upon the minimum safe fuel level being reached.

“The RAAF flight had been given full local approvals to proceed. We are discussing the reasons behind this regrettable incident with all parties to

ensure it is not repeated.

“Australia continues to work closely with the Government of Vanuatu to deliver humanitarian assistance in response to Tropical Cyclone Harold. Strict COVID-19 protocols are being adhered to for the handling of these supplies.”

said the Vanuatu airport was not very big and questioned whether it could take two sizeable jets.

“The C-17 is designed to land on reasonable small airfields given their size, but just how safely there can be two large aircraft operating in parallel and being loaded and unloaded and landing safely might have been the constraint,” Mr Shoebridge said.

“The messiness is on the clearance - to have both the aircraft unable to land.

“Getting the diaster relief supplies there as fast as possible is clearly in everybody’s interest.

It would have been best to have both flights unloaded on that day, and not to have a return flight.”

The mishap comes as China and Australia have both looked to send humanitarian assistance to Vanuatu in the wake of the cyclone. Both countries are also sending medical supplies and other support to help Pacific Island countries prevent any

outbreak of the coronavirus.

Cyclone Harold made landfall on Vanuatu’s northern islands on April 6 before hitting the Solomon Islands, Fiji and Tonga.

At least two people died in Vanuatu, while 27 lost their life in the Solomon Islands when they were swept off a ferry.