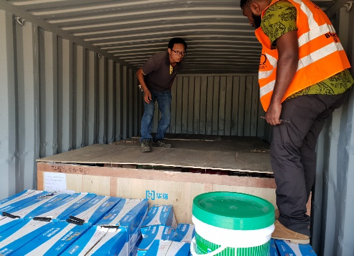 The Department of Biosecurity has penalised the China Civil Engineering Construction Corporation (CCECC) with a fine of Vt536,000 for illegal animal imports shipped in on January 13.

Biosecurity Senior Veterinary Officer, Roger Phillips, said this action is in breach of the Animal Importation and Quarantine Act of 1988 which states, “No person shall import or introduce any animal, animal products, biological product or any related article to Vanuatu without an issued permit”.

Prior to delivery, the cargo ship – New Guinea Chief which sails under the flag of Hong Kong shipped in containers comprising of building materials including container No. TCNU 676751 which contains packages of ham sausages.

According to the arrival advice issued by Tropical Agency Limited, there are no records of any animal products mentioned in the report.

The manifest had the ham on the list but unfortunately, not on the arrival notice.

CCECC Officer responsible for shipment and transportation of goods, Mr. Yang has been contacted on the matter and confirmed the release of containers.

Yang admitted that all the containers had already been opened and were inspected by officers from Customs Department, not Biosecurity.

Border Wharf Manager, John Kelep conveyed on that same day, “our team followed Mr. Yang to his site at Stella Marie where all of the containers were stored.

“Upon arrival, we noticed that all the containers were unloaded except the crates which contained the ham sausages.”

Mr. Kelep said they didn’t hesitate to lock up the container and issued Mr. Yang the penalty notice of Vt345,000 including the other containers of building Materials which totaled up to Vt536,000.

On March 9, Mr. Yang arrived at the office to sort out his penalty fine.

Later on, he was accompanied by the Biosecurity team to eradicate the meat products.

Mr. Phillips would like remind the public on the potential dangers of importing illegal goods into the country without a permit and the importance of on-arrival quarantine/inspections to ensure there is no food safety risks from viruses and bacteria.

Importation of pork products is particularly dangerous in Vanuatu because of the possibility of introducing African swine fever which has resulted in the deaths or killing of millions of pigs in China. This virus is not killed by cooking or other processing, including tinning, of pork products. If this virus escaped into Vanuatu it could do great damage to Vanuatu's pig population.